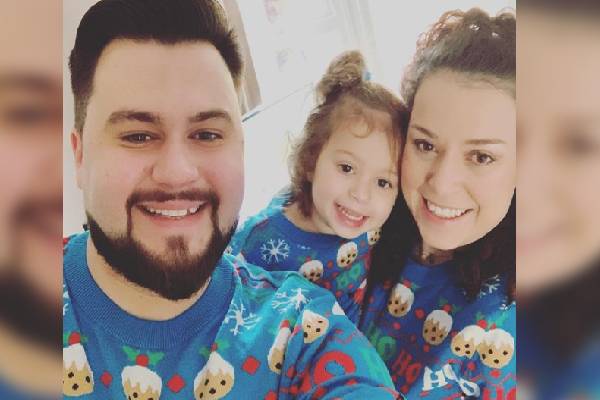 Born as Danielle Jane Harmer, Dani Harmer is a famous English actress, acting coach, and television personality. Harmer is best known for her performance as Tracy Beaker in the CBBC shows Tracy Beaker and Tracy Beaker Returns. Her hard work and dedication made her win BAFTA in 2010. Besides her film and television journey, Dani has also gained immense success and popularity as a singer.

One of the finalists of BBC1’s Strictly Come Dancing, Dani is also a family person. Although we are aware of her professional life, there is a lot more to her personal life. Dani and her beloved, Simon Brough, have not got hitched yet, but they are in a healthy relationship and are proud parents of a baby girl. The pair have welcomed a cute baby, Avarie-Belle Betsy Brough.

Welcomed Her Baby Girl In 2016

Avarie-Belle Betsy Brough is the only child of famous TV personality Dani Harmer and her partner, Simon Brough. The beautiful couple welcomed their daughter, Avarie-Belle, on June 28, 2016.

The good news was announced by Dani and her partner themself through an Instagram post with a photo of their newly born daughter. The former Tracy Beaker star also talked about her grueling three-day labor, which made her devastated. As the delivery time was not as expected, she was given more and more drugs which made her unconscious. However, the jolly parents of Avarie had a photoshoot after her birth for the memories.

Dani had announced that she and her caring lover were expecting their first child together on January 25, 2016. She uploaded a picture of her baby father studying a pregnancy book, through which her fans knew that they were expecting a baby.

Is The Only Daughter Of Dani Harmer

Well, the noted actor and former singer Dani Harmer became the mother of a baby girl when she was twenty-seven-years old. As of now, Dani Harmer’s daughter Avarie is five years old and is the only child of the couple. And the pair seem to be in no hurry to add a new member to their family.

The Harmer-Brough couple is more than happy to have been blessed with a gorgeous kid. They also seem to be fond of uploading photos with their little girl on their social media accounts. Having gone through both of their Instagram, we can say that Avarie is a beautiful child with a gorgeous smile that can melt anybody’s heart.

Dani Harmer’s net worth is around $2.8 million (£2.1million). She is still successful in earning massive wealth and fame from her acting and various other ventures. This makes her lovely daughter, Avarie-Belle Betsy Brough, live a prosperous life.

Similarly, Avarie’s dad must also be providing everything for her. A look through his Instagram shows that Simon loves spending time with her. The father-daughter duo seems to enjoy every moment together. Cute Avarie is so lucky to have Simon Brough as her father.

Avarie’s Parents Are Not Married

The Strictly Come Dancing Star, Dani Harmer, met the love of her life, Simon Brough, in 2015. The talented actress was excited during her pregnancy time and could not wait longer to welcome the child.

Undoubtedly, the beautiful star has successfully portrayed the role of a mother in her professional life. Moreover, she is also playing a significant role as a mom for her child in her daily life. Although she is a doting mother, she has not tied the knot with her lover, Simon Brough. The pair have also confirmed their plan to get married when their little one is older.

Avarie-Belle Betsy Brough, the only kid of Dani Harmer with Simon Brough, is an adventurous kid. She enjoys going on trips with her parents during her vacations. The Brough family often goes to visit different places.

Dani Harmer’s daughter, Avarie, is also fond of playing with snow and spending time in nature. She has a constant face in her parent’s social media handles, where she is seen enjoying her day-to-day life. As Dani Harmer often mentions on her social media, the family is never bored when there is little one around you.

Like most of the children, Avarie is also carefree and fun-loving. This shows the close bond that Avarie shares with her parents. We love seeing the beautiful child happy and enjoying her life to the fullest.