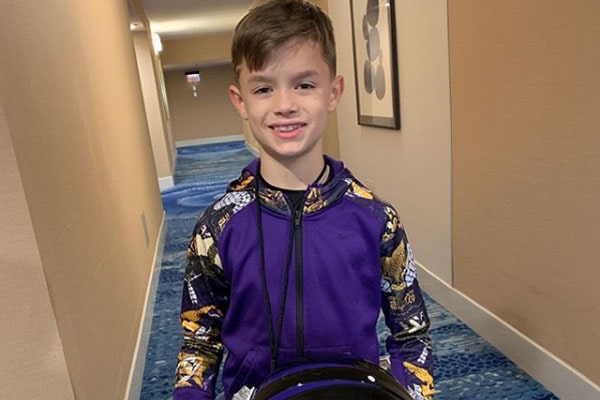 Baylen Robert Brees is Drew Brees‘ son with his lovely wife, Brittany Brees, and was born on Jan 15, 2009. Since he is the eldest child of the couple, he has three younger siblings. They are Bowen Christopher Brees, Callen Christian Brees, and Rylen Judith Brees.

As we are talking about Baylen, his dad, Drew, is an American football quarterback and plays for the New Orleans Saints in the NFL. His mom is well-known as Drew Brees’ wife. Well, you may not be that familiar with Drew Brees’ son, Baylen. So, stick up with the article until the end and get to know more about him.

Baylen’s Got Into Painting Shoes

Drew Brees’ son, Baylen, has got into painting shoes at the moment. It has been his passion to make arts on the shoes. Amidst this pandemic, he is thriving as an artist, and Drew has been so proud of him. With his custom shoes, Baylen raised over $11,300 so far for COVID-19 Relief.

Baylen is bringing the best form out of himself and doing artworks on many pairs of shoes. The kid pursued an interesting hobby and is shining doing some good deeds. It’s so great to see how Baylen is setting an example for his siblings already.

And most of all, his dad and mom are so much proud of him. Who knows, he might evolve as a brilliant artist over the coming years. Nevertheless, Baylen is becoming productive with time to help the helpless who have been suffering during this worst situation at the moment.

Well, Baylen Robert is also athletic and sports-lover just like his dad. Going through Drew Brees’ Instagram, he usually posts Baylen and his brothers’ videos of playing Basketball and some of the trick shots. Among them, Baylen and his little brothers are great at doing slam dunk shots.

Perhaps Drew Brees’ son went on to love Basketball more than football. But they even play football and Drew is probably training his young ones from the start. He must be very delighted to see his sons with a keen interest in the sports area.

Baylen, with his brothers, Callen and Bowen, practice Basketball at their small court at home. They all are getting better day by day. Plus, he also loves playing baseball. Furthermore, Baylen also goes to watch his dad’s game and see what daddy does and maybe meet other players in the locker room as well.

Well, we can see that Baylen is a sports-lover and loves playing Basketball with Bowen and Callen. Drew’s successful career could be the reason for their keen interest in sports, right?

No Dull Moments In The Brees House

The Brees family has no dull moments but lots of excitement and fun. All of Baylen’s family members are so connected with each other. The married couple’s kids often do hilarious things to make their day. Drew also takes his wife and children to splendid vacations and holidays.

With all that, it’s sure that Drew Brees is providing the best life to his children. Seeing the Brees family all happy and glowing, Baylon is very fortunate to be the part of such a lovely family indeed.

The name Baylen is of French origin, meaning ‘auburn-haired.’ Similarly, according to English origin, Robert refers to ‘famed, bright, shining.’