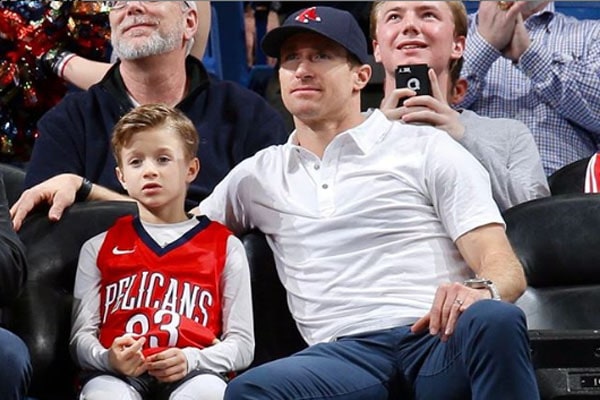 Drew Brees is an American football quarterback who plays for the New Orleans Saints of the NFL and has made a successful and remarkable career. Well, talking about his personal life, Drew married his beautiful wife, Brittany Brees, in 2003. The lovely couple has four adorable children altogether.

Among them, Bowen Christopher Brees is Drew Brees’ son with wife, Brittany, and was born on Oct 19, 2010. He is the second child and has two brothers, Callen Christian Brees and Baylen Robert Brees. Bowen also has a small sister named Rylen Judith Brees.

Bowen is very fortunate to have such wonderful parents and siblings. So, let’s not waste any time and know more about Drew Brees’ son, Bowen Christopher.

Bowen Christopher Had His First Shiner

Drew Brees’ son, Bowen Christopher, had his first shiner or ‘black eye.’ The NFL quarterback shared Bowen’s black eye on his Instagram, but he did not tell how it happened on May 29, 2020. Instead of getting bummed, Bowen seemed like he was proud, haha!

He might have had the shiner while playing around with his brothers and sister. Perhaps he is recovering from the shiner now.

Similarly, he is also very passionate about sports like basketball and American football. Drew loves to update his social media handle with his kids’ photos and videos. Bowen’s dad also loves to play with them. He frequently posts about Bowen, playing basketball with his brothers, jumping on the trampoline, and playing football as well.

Bowen’s parents are so much close to their kids. They also get childish when they are together. Plus, the Brees family, celebrating festivals together, shows what a great bond they have with one another.

Bowen dressed up as a sumo player, so did his parents and siblings donned with spooky and funny costumes during Halloween 2019. Having that said, Drew Brees’ son, Bowen, is happily enjoying his life with his family.

Close To His Siblings

As mentioned earlier, Bowen is very close to his siblings, two brothers, and a sister. All of Drew’s kids are always getting entertained since they all play together. Bowen and his siblings undoubtedly brought loads of happiness and delights in the Brees family.

Drew Brees and his wife, Brittany, are so happy to see their kids, getting along with each other. Bowen and his siblings also built a clubhouse. The funny part was after every two minutes they asked, “Is it done yet?”

Also, Bowen probably is blessed with a lavish lifestyle since his dad’s net worth estimates around $160 million. Drew Brees might be doing all that he can just to see his kids, Bowen and his siblings happy. So, in all, we can clearly say that Bowen has a close relationship with his siblings and also has a splendid and happy life.

The name Bowen is of Welsh origin, meaning ‘Son of Owen.’ Similarly, Christopher is the English name of the Greek name ‘Christóforos’ and means ‘Christ-bearer.’