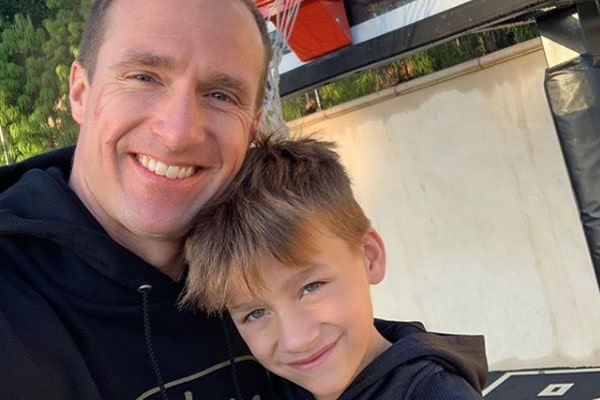 Drew Brees‘ son, with his wife, Brittany Brees, is Callen Christian Brees and was born on Aug 15, 2012. He is the youngest son of the lovely couple. Callen has two elder brothers, Baylen Robert Brees and Bowen Christopher Brees. He also has a younger sister named Rylen Judith Brees.

As for Callen’s dad, Drew Brees, he is one of the American football quarterbacks and plays for the Neal Orleans Saints in the NFL. His mom is well-known as Drew Brees’ wife and partner in the spotlight. Now, coming back to Callen, most of you may not know him as his dad. So, stick up with the article from top to bottom to know more about Drew Brees’ son, Callen Christian.

Wrestled With A Bear

You may be in a shock to hear that little Callen is very brave since he wrestled with a bear. But he had a scar from the bear’s scratch on his left eye. Drew took it to Instagram and posted Callen’s photo with a bear scratch on his eye. He captioned, saying, “And Callen wrestled his 1st bear…. you know what they say… Sometimes you get the bear, sometimes the bear gets you!”

We wonder where the bear came from or was it just some metaphor for some mishap. However, Callen is a tough kid like his dad. His brothers and sister probably had a jaw-dropping reaction when they knew Callen fought a bear. Perhaps his scars are healing with time, and Drew, and his wife must be taking good care of him too.

Drew Brees’ son is also an early riser. He loves doing word searches with his dad. The father-son duo has a great bond and connection. Drew is always there for his son and is doing great as a father.

Callen Christian Brees is a huge fan of basketball and the NBA baller, Stephen Curry. Drew Brees’ sons are so much into basketball, and Callen usually plays basketball with his brothers. They love doing slam dunk shots and trick shots as well. Like father like son. Drew frequently posts Callen and his brothers’ trick shots on his Instagram.

As a Stephen Curry fan, it looks like he goes to watch his basketball games too. It looks as though Stephen Curry is an inspiration and role model for Callen. Maybe Stephen might surprise Callen someday.

Hey @stephencurry30 ..my 7 yr old son Callen is a huge fan! He wanted to impersonate one of your game winning shots and asked if I would get him one of your jerseys if he made it… I told him to ask you himself 🙂 so here goes! He even gave it the patented shoulder shimmy at the end! 😜

Besides that, Callen’s favorite football player is his dad only. Callen has turned out to be a sports-lover, just like his dad. We don’t know what Callen’s future holds, but he could either be a basketball player or a football player. Or he could pursue a different career, who knows?

Has A Magnificent Life

Since Drew Brees has an astounding net worth of $160 million, Callen has been provided with a magnificent life. Drew Brees is a family guy and loves his children more than anything in the world. Drew takes his wife and children to luxury vacations and holidays. He and his family also had a lovely day at Disneyland.

The Brees family has no dull moment in their house. Drew and Brittany’s kids have brought tons of happiness and joy in their life. Plus, Callen has a close relationship with all of his siblings. We wish their happiness remains the same and never fades away.

According to Irish origin, the meaning of Callen is ‘Slender.’ Similarly, Christian is of English origin and means ‘follower of Christ.’