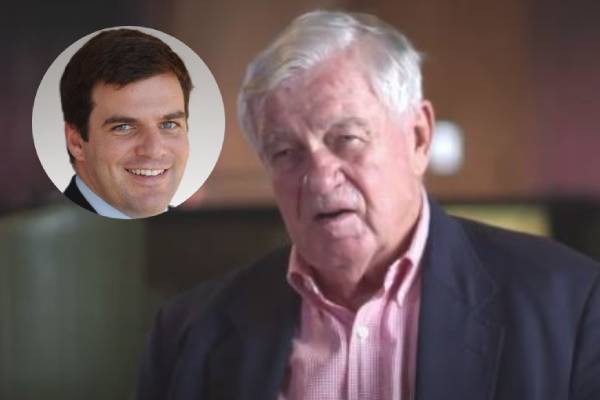 Phil Castellini is one of the kids of Bob Castellini and Susan Castellini. Image Source: Social Media.

Bob Castellini, born Robert Castellini, has been the CEO of Cincinnati Reds since 2006. He has made himself known for the implementation of cost-cutting measures in the team. Furthermore, he also serves as the chairman of the Castellini company, a fruit and vegetable wholesaler.

Just like his professional career, Bob’s marital life is also a huge success. He has shared a blissful married life with Susan Castellini for several years now. They together have three children, a daughter and two sons.

In this article, let’s know in detail about Bob Castellini’s son, Phil Castellini, and his whereabouts.

One Of The Sons of The Castellini Couple

As mentioned earlier, Bob Castellini has been married to Susan Castellini, aka Susie Castellini, for several years now. The duo loves each other very much, and their marriage has always remained the same. In addition, Bob’s wife, Susan, gave birth to their three kids in many decades of their togetherness.

The Castellini siblings must have had a great childhood while growing up together.

Is The Chief Operating Officer For The Cincinnati Reds

As the COO of the team, Phil looks after all ballpark and business operations and then reports directly to the Reds’ President and CEO, Robert H. Castellini. Under Phil’s leadership, Reds’ fan engagement after revenues reached a record high. In addition, the Reds witnessed the growth in ticket sales, merchandise, corporate partnerships, and concessions which reflected the invigorated culture within its business operations.

Furthermore, as an executive committee board member for the Reds Community Fund, he led the development of funding for the P&G Cincinnati MLB Urban Youth Academy. The Academy, which was established in August 2014 in Roselawn, is the first in Midwest, and it was established as part of MLB’s Urban Youth Academy Program. Therefore, Phil must be doing well as the COO of the Reds and must be earning significantly.

Bob Castellini’s Son Has Been Involved In Other Different Ventures

Besides being the COO of the Cincinnati Reds, Bob Castellini’s kid, Phil Castellini, has also been involved in several other ventures. He went to Babson College and graduated with a Bachelor of Science in Marketing and Entrepreneurial Studies and a minor in literature. Furthermore, he did post-graduation from the University of Pittsburgh’s Semester at Sea program.

Phil was engaged in civic activities in the community. He even served as a member of the Commonwealth Club, the Young Presidents’ Organization. Moreover, he worked as a President at Joy Outdoor Education Center.

Phil also served on the Board of Directors of the Cincinnati USA Regional Chamber and was also on the Queen City Club Board of Governors. He was also one of the trustees on the Cincinnati Parks Foundation Board. He must have earned significantly from these various ventures.

Bob’s son, Phil, must be living a wonderful life with his wife, Britt Castellini. They have five kids, Lucia Castellini, Gabrielle Castellini, Chloe Castellini, Millie Castellini, and John James Castellini. However, they live a life away from the spotlight, and their dad and mom have worked hard over the years to keep their life as private as they could.

But, we do hope to know more about Bob Castellini’s son, Phil Castellini, in the coming days.

The name Phil has a Greek origin, and it means Lover Of Horses.