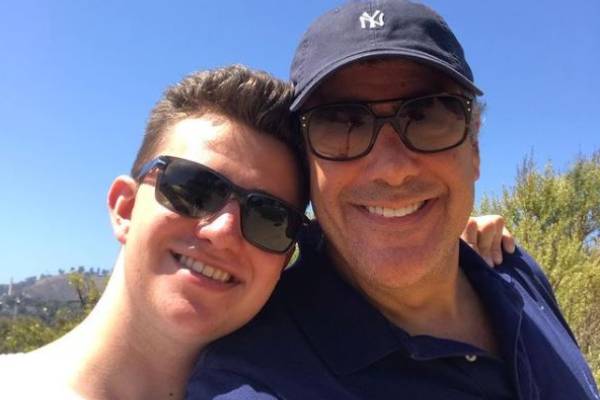 Whether they want it or not, celebrity kids are subjected to media scrutiny from an early age. Take Brad Garrett‘s son, Maxwell Bradley Garrett, for example. Maxwell has been in the spotlight due to his father, Brad’s fame, and it seems like the attention towards his life won’t go away anytime soon.

So, who is Maxwell Bradley Garrett, and what is he doing now? To find the answers to these questions, stay until the end.

Maxwell Bradley Garrett is the oldest child of Brad Garrett and his ex-wife, Jill Diven. He was born on the 14th of October, 1998, in California. Moreover, Garrett is the only son of the pair and has a younger sister named Hope Violet Garrett.

Maxwell Bradley’s sister, Hope, was born in February 2000, two years after his birth. The Garrett siblings might have had a comfortable childhood as their dad, Brad, was already a television star.

However, much about Hope Violet and Maxwell’s life is a secret because their parents, Brad and Jill, wanted to keep their children away from the media scrutiny.

While Maxwell’s parents were in tandem regarding their children’s privacy, they did not have similar experiences in terms of their relationship. Jill Diven and Brad Garrett’s marriage could not last long, even though many expected them to be together for many years.

The former pair had started dating while Jill was working as a cocktail waitress and got engaged in 1998. They had already welcomed their firstborn, Maxwell, into their lives before exchanging vows in 1999. Moreover, the following year, Maxwell’s mother Diven gave birth to their daughter.

However, Garrett and Diven’s marital life could not survive the test of time, and they reportedly separated in 2005. On the other hand, People magazine suggests that they split in 2006. Whatever might be the correct timeline regarding their break-up, Maxwell Garrett’s parents officially divorced in 2007.

After the divorce, the former couple has moved on with their respective lives. Maxwell’s dad is married to IsaBeall Quella, and the pair are very open about their relationship. The pair got married on Nov. 11, 2021, after four failed wedding dates over the years. Brad Garrett’s son and daughter are also very close with their stepmom.

In contrast, Jill has stayed away from the limelight and has kept her personal life extremely private. But she must be enjoying a comfortable lifestyle as she received half of the assets that she and Garrett earned while married.

Moreover, Maxwell Bradley’s mom also collected around $20K in child support till both of her children graduated from high school. And since Jill Diven and Brad Garrett shared physical and legal custody of their kids, the ex-pair might have shared an amicable relationship for years.

So, Where Is Brad Garrett’s Son, Maxwell Now?

While we have talked about Maxwell Garrett’s childhood and his parent’s divorce, unfortunately, there is very little information about his whereabouts. Brad’s son, unlike his sister, is not active on social media and seems to prefer a life away from the spotlight.

However, he was pictured alongside his dad in the 2015 Floyd Mayweather VS Andre Berto fight in Las Vegas. Besides this one instance, Maxwell has rarely appeared in any major industry events. But he is a constant face on Brad’s Instagram page.

Going through the actor’s social media pages, we can see that he is very proud of his eldest child. Moreover, looking at one of the pictures shared by the Everyone Loves Raymond star, Brad Garrett’s son seems to be involved in the medical field.

Apart from this small tidbit of information, not much has been revealed about Maxwell Bradley Garrett. Also, there is no mention of Garrett’s girlfriend as of now. But we hope he does have someone to share his happiness as well as sadness with.

Nevertheless, let’s hope in the coming days, Max opens up about his life.