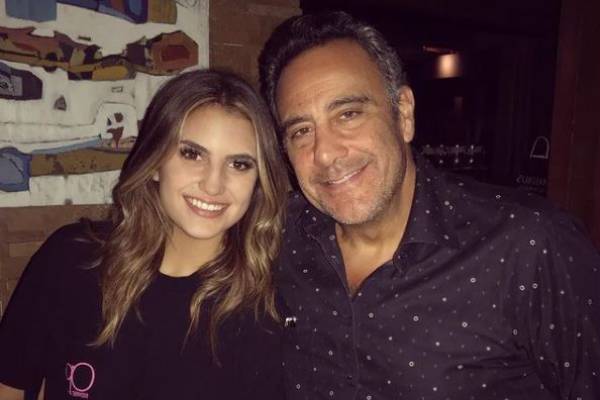 Being a child of a well-known celebrity means they are also shoved under the spotlight, whether the individual wants it or not. One prime example is comedian and actor Brad Garrett‘s daughter, Hope Violet Garrett. Brad is best known for his work in the popular sitcom, Everybody Loves Raymond.

Due to his fame, many want to know more about Garrett’s personal life, including who and where his children are. So if you are one of them, stay till the end to get to know Hope Violet Garrett better.

Hope Violet Garrett is the only daughter of Brad Garrett and his ex-wife, Jill Diven. She was born in February 2000 as the youngest child of the pair. Hope has an older brother named Maxwell Bradley Garrett, who was born in October 1998.

When she and her brother were born, Brad Garrett, Hope’s dad, was already a well-known actor. So, they must have experienced a comfortable childhood. Moreover, since the Garrett siblings are only two years apart, they probably share a close bond.

Hope Violet Graduated From FIDM In 2021

While many might remember Brad Garrett’s daughter as a young girl who accompanied her father to events, she has already grown up and is now a college graduate. She was enrolled in FIDM (Fashion Institute of Design & Merchandising) and graduated in September 2021.

As per her LinkedIn, Hope Violet studied at Oaks Christian School and was involved in volunteering projects while attending high school. Garrett also worked as a Retail Salesperson for daisy dukes from June 2016 to June 2018. She then interned at The Real, where she ran errands and assisted stylists during photo shoots.

Seeing as Hope Violet Garrett studied Apparel Industry Management and Business Management, it is clear that she is interested in the clothing industry. Maybe she will work as a stylist for top celebrities, or she might even launch her own clothing line.

Whatever might be Hope’s career trajectory, we hope she finds immense success.

Hope’s Parents Are No Longer Together

Hope Violet Garrett’s parents, Brad Garrett and Jill Diven were one of the most talked-about couples in the 1990s. Jill was a waitress in Las Vegas when she met her future husband. And after dating for a while, Brad proposed to Jill in 1998 on the set of Everyone Loves Raymond.

Diven and Garrett got married in 1999, and many thought that their relationship would last forever. However, surprising many of their fans, the former pair split only a few years into their marriage. People suggest that Hope Violet’s mom and dad separated in April 2006. However, other sources claim that they had already split in 2005.

Despite ending their relationship years earlier, Jill Diven and Brad Garrett’s divorce was not finalized until 2007. The ex-pair were involved in a legal battle regarding their children’s custody and the details about their assets.

As per Access Hollywood, the former couple split all of their assets, and Brad had to pay $7,400 in child support for their son per month. As for Hope, her dad paid $12.6K a month till she turned 19 or completed high school studies.

Moreover, Diven and Garrett shared joint physical and legal custody of the kids. So, Brad Garrett’s daughter, Hope Violet, must have spent an equal amount of time with her mother and father and has a lovely relationship with both of them.

After the divorce, Hope Violet Garrett’s parents moved on with their respective lives. Brad is married to his long-term partner IsaBeall Quella. The pair got married on Nov. 11, 2021, but kept it a secret for quite some time. Hope shares a close bond with her stepmother, IsaBeall.

Aforementioned, Hope Violet Garrett shares a great bond with her parents. And judging by her old Instagram posts, it seems like she enjoyed going to concerts with her dad. A music lover, Brad Garrett’s daughter, has shared pictures of herself attending shows of stars like Justin Bieber, Drake, Bruno Mars, and many others.

Plus, Brad Garrett has also accompanied his little girl to many of these concerts. But now, as an adult, Hope is mostly attending music shows and festivals with her friends. Nevertheless, the father-daughter duo is still close and loves spending time together.

On a side note, there is no information about Hope Violet Garrett’s boyfriend as of now. She seems to be enjoying her time as a single woman traveling with her girlfriends.

Nonetheless, let’s hope we get to know more about Brad Garrett’s daughter, Hope, including her personal and professional life in the coming days.

The feminine name Hope is of English origin, which means desire of fulfillment. On the other hand, Violet is derived from the Latin word viola that means purple.