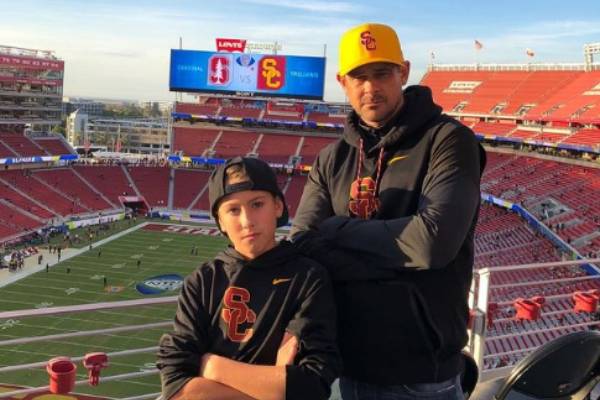 We are all familiar with Aaron John Boone, former MLB infielder, and current New York Yankees’ manager. Aaron Boone has been in the spotlight for so long due to his professional accomplishments that many people forget that he is also a father of four.

With Aaron’s growing fame, fans are curious to learn more about his personal life, including his relationships and children. So, let’s see what Aaron Boone’s son, Brandon Boone, is up to these days. Let us also find out if Aaron’s son is following in his footsteps or pursuing a new career path entirely.

Laura Cover and Aaron Boone have been married for a long time. The couple married in November of 2002 and have been enjoying a blissful married life ever since. In addition, Aaron and Laura have two children of their own and have adopted two Haitian boys.

Brandon Boone, Aaron Boone’s eldest biological son, was born three years after the couple married in 2005. His younger sister, Bella Boone, was born four years later in 2009. Brandon is also a brother to Jeanel Boone and Sergot Boone, who were adopted in 2012.

Aaron Boone’s son is very close to his family and can be seen with his parents and siblings during his father’s matches. However, despite his father’s fame, Brandon has chosen to avoid the spotlight for the time being. Therefore, it might be some time before we learn the complete details of his whereabouts.

Nonetheless, we wish Brandon the best of luck and hope he succeeds in his chosen career.

Is A Private Individual

Whether they like it or not, celebrity kids are subjected to media scrutiny from an early age. And while some kids take full advantage of the publicity they receive, others want nothing to do with the drama that comes with media attention. Unfortunately, Aaron Boone’s child happens to be one of the kids that fall into the latter category.

However, avoiding the media altogether while being the son of a renowned baseball player who helped define the course of baseball is almost impossible. So, Brandon has been spotted alongside his father and siblings in many of his games.

Similarly, Brandon’s father has also shared several pictures of him on his Instagram account, praising and admiring him. It is evident that the father-son duo is very close and enjoys each other’s company.

Still, we expect Aaron’s son will become more comfortable with the media and appear more in the spotlight as time goes on.

Although Aaron Boone’s son has done an excellent job of avoiding the limelight, this hasn’t stopped his father from expressing his pride in his son. The Yankees’ manager stated in an interview that he enjoys seeing Brandon play baseball and football. Furthermore, he also instills in his son the importance of enjoying what he does and not being overwhelmed.

In addition, Brandon also accompanies his father in numerous of his matches. Additionally, having such a baseball legend as a father, there was no doubt that one of his children would continue his legacy. And looking at Brandon Boone’s Twitter, he has followed in his father’s footsteps and is pursuing a career in baseball.

While the former baseballer’s son has not appeared in any significant games, there is no doubt that Brandon will continue to improve his skills. And one day he might even establish a greater name in baseball history than his father.

However, there is also a possibility that Brandon might choose a different career path altogether in the coming days. Nonetheless, without a doubt, Boone’s kid will prosper at what he does.

Apart from being a baseballer, Brandon is also a high school student and is currently receiving his education from Canyon del Oro High School in Tucson, Arizona. Boone’s son appears to be an athletic kid and plays baseball in college as a freshman.

While Brandon is pursuing a collegiate career in baseball, his brother, Jeanel, was the captain of Greenwich High School’s soccer team. Moreover, he also assisted his team to the FCIAC Championship game in 2019. Additionally, after graduating from high school, Brandon’s brother enrolled at Western Connecticut State University and earned a spot on the highly successful men’s soccer team.

Similarly, Boone’s younger brother, Sergot, is also a high school student and plays soccer at Greenwich High School. And like his brother, Sergot appears to be a private individual who prefers to stay away from the media.

Even though Aaron Boone’s sons have yet to achieve notable success in athletics, with such an amazing figure to look up to as a father, it is unavoidable. As a result, we eagerly anticipate the day when the boys make history in their respective fields.

For now, we wish Brandon and his family the best and hope that their happiness multiples over time.

Brandon is a boy name primarily used in the Christian religion, meaning Beacon hill, and has an English origin.