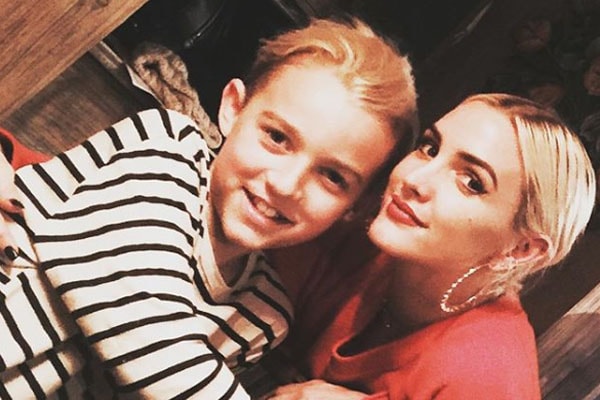 Ashlee Simpson‘s son Bronx Mowgli Wentz was born on the 20th of November 2008. Ashlee had her first child Bronx with her ex-husband Pete Wentz. At the time of the birth, Bronx weighed 7 pounds 11 ounces and was measured 20.5 inches long.

The handsome Bronx Mowgli Wentz is the firstborn son of both Ashlee Simpson and Pete Wentz. The whole family was cherished to add a new member to their small family. Altogether Bronx Wentz has got three younger siblings. He has got two half-siblings from his father’s side, Saint Lazslo Wentz and Marvel Jane Wentz, Pete Wentz’s children with partner Meagan Camper. And a half-sister named Jagger Snow Ross, Ashlee Simpson’s daughter with husband, Evan Ross.

While looking at the good-looking son of Ashlee Simpson, it seems that Bronx Mowgli has inherited the best genes from both of his parents. He has got a blonde hair like his mother Ashlee and has got a fair complexion like his father, Pete.

Bronx Mowgli lives with his father, but at times he attends events alongside his mother and her husband. And by the looks of it, Ashlee Simpson’s husband, Evan Ross has got a friendly relationship with the young Bronx Wentz. During an interview, Evan stated that he has got a good relationship with Pete and considers him an excellent father.

Even after the divorce, Bronx Mowgli’s parents are on good terms. When it comes to their son Bronx Mowgli, both are up and ready for it. On February 4, 2018, Pete Wentz and his ex-wife Ashlee Simpson reunited for their son, Bronx’s tennis lesson.

It is a trend in Hollywood amongst celebrities to give their children a unique name. And we have to admit though, Ashlee has given one heck of a name for her son. Alongside that, Bronx also has got cousins who have got an extraordinary name such as his, Ace Knute Johnson and Maxwell Drew Johnson, Jessica Simpson‘s children with husband, Eric Johnson.

Bronx’s father Pete usually doesn’t upload photos of his children. But on Bronx Mowgli’s ninth birthday Pete uploaded a picture of his son wishing him the best.

The name Bronx is originally a Dutch surname. It is also a borough in the New York City.

As for the name Mowgli, it is a fictional character of the Rudyard Kipling’s Jungle Book.