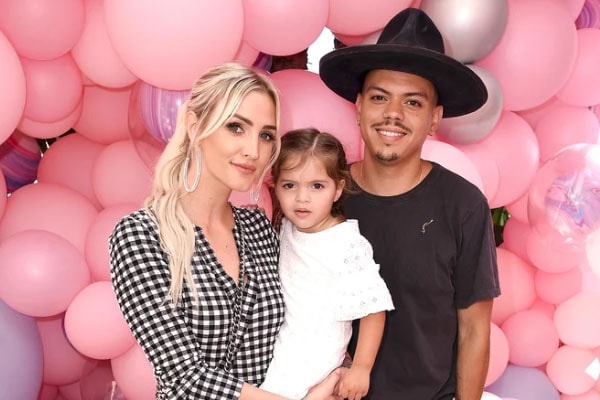 Evan and Ashlee announced the birth of their daughter on their social media. Jagger has got an elder half-brother named Bronx Mowgli Wentz, son of Ashlee Simpson with ex-husband Pete Wantz.

It looks like Ashlee Simpson is teaching her daughter Jagger Snow to be an expert in makeup from her early age. While attending a launch party of Petite ‘n Pretty, the mother-daughter duo seemed to be bonding quite affectionately with one another. While the little Jagger pouted, her mother was very focused on applying a lip gloss perfectly on her.

If you go through Ashlee Simpson’s Instagram account “ashleesimpsonross” then you will find plenty of photos of her daughter Jagger Snow. We can clearly see how much love Ashlee has got for her little one.

During an interview with  ET’s Keltie Knight, Jagger Snow Ross’ parents revealed that they want more babies. The pair of Ashlee Simpson and Evan Ross stated how their life had changed after the arrival of Jagger Snow and now wanted five more babies in their life. Plus, Ashlee got a surprise from her sister Jessica Simpson, who is pregnant again with her third baby. So let’s hope we too will hear good news from Ashlee and Evan pretty soon.

Evan Ross is the son of famous singer Diana Ross. And the cute Jagger Snow adores her grandma. Ashlee stated that her daughter wants the sparkles and the microphone and all it is thanks to Diana. Who knows in the coming days, Ashlee Simpson’s daughter Jagger Snow might even surpass her.

Some Facts About Jagger Snow Ross

The name Jagger developed from a profession name; Jag means pack or load, so jagger basically means a peddler.

As for the name Snow, it is a nickname of someone with a fair complexion.