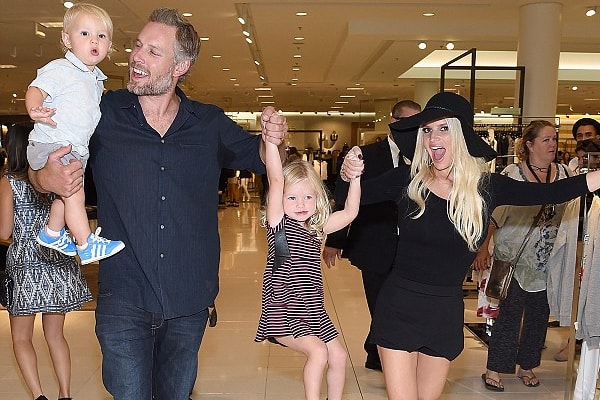 It was a year ago when American Singer revealed she had no plans of having a third child and was on pills, the IUD. Jessica and her husband Eric Johnson were happy with two beautiful kids; daughter Maxwell Drew (born 2012), and son Ace Knute (born 2013) and the addition of the third baby girl eventually adds a cherry on the pie.

Popstar Jessica had left her fans baffled in September when she announced in her Instagram post that a little baby girl will be an addition to her sweet family. Jessica’s sister Ashlee was just as shocked as rest of the world when her sister had called with the surprise news.

Speaking to US Weekly, Ashlee stated it was definitely a surprise for her. Ashlee was at Tracy Anderson dance-aerobics class when Jessica had called her and said it was amazing to hear the happy news.

Not only sister Ashlee was happy and surprised with the news of Jessica’s third pregnancy but her husband Evan Ross was also left surprised. Speaking to ET online Ross said he was over the moon to be expecting another lovely niece. 30-year-old musician stated everybody was excited over Jessica’s baby news, which was a bit of a surprise.

As for whether he and his wife are thinking about expanding the family, Evan told that it was up to Ashlee to say the word. Ashlee and Evan have a 3-year-old daughter Jagger.

Kids Maxwell and Ace excited to have a sibling

Jessica’s daughter Maxwell and son Ace will soon have a baby sister to play with and the kids have been a huge part of their parent’s decision to expand their family. The kids are already helping them to plan the nursery and both of them are excited to have a sister. Maxwell and Ace constantly talk about it and tell everyone who will listen that they will have a sibling.