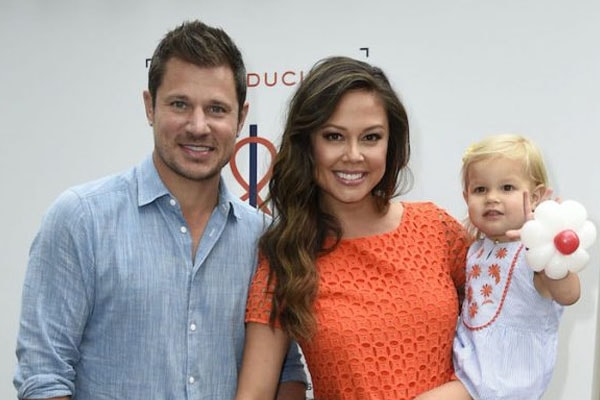 The 98 Degrees frontman Nick Lachey‘s daughter Brooklyn Elisabeth Lachey was born on the 5th of January, 2015. Nick had his kid Brooklyn with wife Vanessa Minnillo. During the time of the birth, the cute Brooklyn Elisabeth weighed 7 pounds 15 ounces and measured 21 inches.

Brooklyn Elisabeth Lachey is the second child of Nick and Vanessa. She has an elder brother named Camden John Lachey and a small baby brother named Phoenix Robert Lachey. Brooklyn’s mother Vanessa is Nick’s second wife. He had previously tied a knot with singer Jessica Simpson who is expecting her third child with husband, Eric Johnson.

The bond between Nick Lachey and his daughter Brooklyn Elisabeth is pretty strong. When Brooklyn was just three months old, she used to smile when her father made faces in front of her as she wrapped her fingers around his. Nick says that his daughter Brooklyn has already had him hooked, lined and sinkered in the whole daddy’s girl thing.

According to Nick, his cute daughter Brooklyn Elisabeth is the happiest baby ever as she smiles and laughs a lot. Before the birth of Nick Lachey’s daughter Brooklyn Elisabeth, he wasn’t sure of what to expect of her as he couldn’t imagine loving a child more than his son. But in the end, it seems like he now knows, what it feels like to have a daughter as the father-daughter duo spend a lot of quality time together.

Apart from visiting different places and playing soccer together, Brooklyn Elisabeth is also her father’s gym partner. Brooklyn Elisabeth also goes on music practices with her father and seems to enjoy it. Plus who knows in the coming days, the little Brooklyn could also be a great singer like her father, Nick Lachey.

Brooklyn is a borough in New York City. When asked about the name Brooklyn, Nick replied that it was a homage to New York.

As for the name Elisabeth, it is derived from a Hebrew word elīsheba` which means God is my oath.