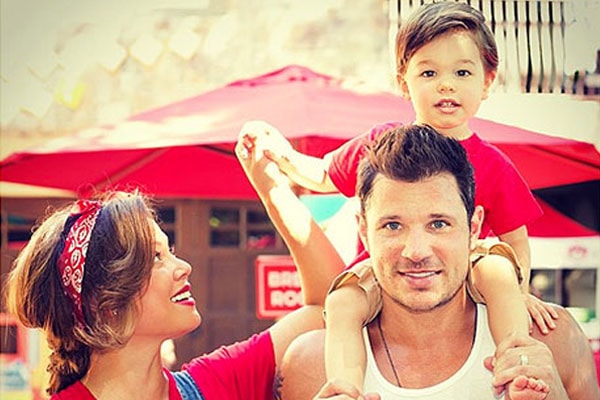 Camden John Lachey is the eldest among Nick Lachey’s three children. He has a cute sister named Brooklyn Elisabeth Lachey and a baby brother named Phoenix Robert Lachey. Camden’s father Nick was previously married to singer and actress Jessica Simpson, and she is pregnant again with husband Eric Johnson.

It’s difficult for parents to see their younglings grow up, and so is the case with the 98 Degrees frontman Nick. Nick’s son Camden has already started kindergarten, and Nick was feeling both high and low for his little one. The singer Nick uploaded a series of photos of his son Camden on his Instagram, and his caption stated that it could apparently be his last day for public kisses.

This shows how much of a lovely and robust bond the father-daughter duo of Nick and Camden have. Not just Nick Lachey, but his wife Vanessa too uploaded a photo of her hugging their son Camden. Unlike Nick, his wife Vanessa had a lot of things to say for their son. She wrote a huge caption that showed her love for Camden.

Alongside being a kindergartner, Nick Lachey’s son Camden John Lachey also loves playing baseball. Nick once uploaded a photo of Camden all focused on hitting the ball and his caption ended with “#prouddad.” So we can see how much proud Nick is of his little one.

Being an elder brother, Camden has to protect his sister, and by the looks of it, he is performing it very well. It seems there is an inseparable bond between Camden and Brooklyn.

Some Facts About Camden John Lachey

The name Camden means “from the winding valley” in Anglo-Saxon.

As for the name John, it is a Hebrew baby name, and it means that Jehovah has been gracious.