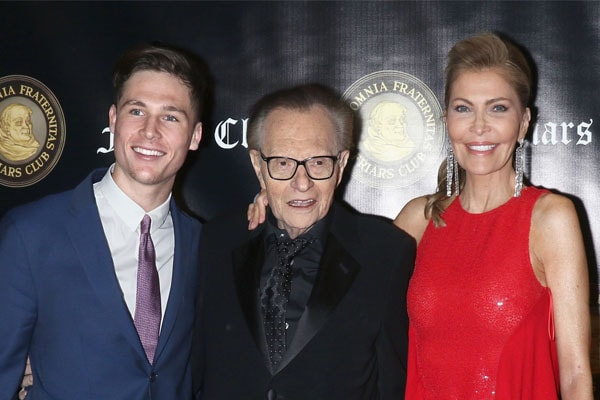 Chance Armstrong King, Larry King‘s son with his ex-wife Shawn King was born on the 9th of March 1999. Chance’s father Larry was the famous TV host of the fan-favorite show Larry King Live while his mother is an actress, producer, singer, and songwriter. Unfortunately, the legendary host, Larry King died at the age of 87 in Cedars-Sinai Medical Center in Los Angeles on 23 January 2021.

Chance’s parents Larry King and Shawn King were married in 1997. However, Shawn is not the only wife of the famous TV celebrity Larry King. Including his 7th wife Shawn, Larry has married eight times to seven different women including Freda Miller, Annette Kaye, Alene Akins, Mary Francis, Sharon Lepore, and Julie Alexander.

Larry King has achieved a lot in his long talk-show career. However one of the greatest thrills of his life belongs to his son Chance King. The Larry King Live host, Larry beamed with pride as his son Chance was drafted into the Major League of Baseball(MLB).

Proud of both of my sons Cannon & Chance! pic.twitter.com/l6AZJfvH20

According to the Daily Mail, Chance King is a huge LA Dodgers fan but he has been drafted to the Chicago White Sox in 2017. He was picked by the White Sox in the 39th round of the MLBDraft2017.

The pro-baseball player, Chance King is a student at the IMG Academy in Chicago. Looks like, he is making his father proud and will keep on improving his baseball career.

Chance King’s Parents Were At The Verge Of Getting Divorce

Shawn and Larry King filed their first divorce back in 2010. Sources claim that Shawn tried to file the divorce papers first but was unsuccessful because of Larry’s legal team. So, the two reconciled and stayed in their marriage for another 9 years until Larry filed once again in 2019.

As mentioned earlier, the pair share two children together named Chance and Cannon King. As of 2019, both the kids including Chance are in their early 20s and it seems that they can deal with their parents’ failed marriage.

Recently in 2019, Chance took on his Instagram to deny the false accusations claimed by TMZ. According to TMZ, the two brothers, Cannon and Chance were the ones who encouraged their father to file for divorce against Shawn.

However, looking at the fact, it seems obvious that there was no misunderstanding between the King’s parents and children, and they were happy with the combined decision of the family.

Two Of His Five Siblings Died

Experiencing death is difficult for every individual but the pain of losing a child is immeasurable for any parent and siblings.

Two of three King siblings died of sudden causes on July 28, 2020, only weeks apart. Chance A. King’s brother, Andy King passed away from a heart attack while his half-sister, Chaia King followed only weeks later. She died after having been diagnosed with lung cancer in August 20, 2020.

Chance’s father, Larry confirmed the saddening news via Facebook while thanking everyone for their wishes.

Chance is a boy’s name of Middle English Origin meaning “good fortune“.  Also, Armstrong is a masculine name “a man having strong arms.”