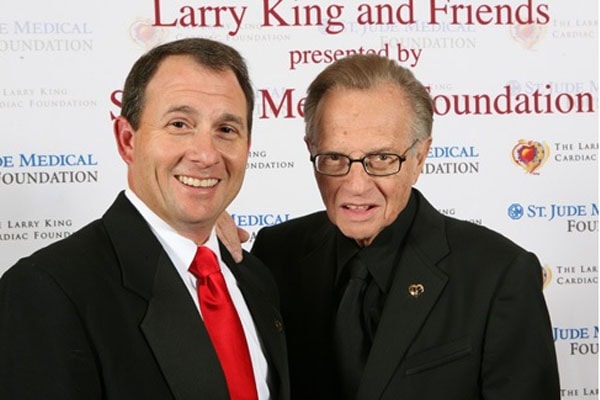 Recently, on 23 January 2021, the legendary TV host Larry King died at the age of 87, leaving behind his wife of over two decades, Shawn Southwick, and five children. Before Shawn, he was married to six more women, including Annette Kaye. Larry King Jr., born in November 1961, is Larry King’s son with his ex-wife, Annette Kaye. Handsome Larry Jr.’s parents were married in the same year he was born that is in 1961. However, the marriage couldn’t last long, and the former couple got separated a year later in 1962.

According to the New York Post article which was published on 21st May of 2009, Larry didn’t acknowledge or mentioned his son Larry Jr for 33 long years. The father and the son even didn’t meet each other up until 2009, when Larry Jr. appeared for the first time with his dad, King on Larry King Live.

The story was also very unusual as Larry didn’t even know that he had a son out there. He told to the post:

“I didn’t know he was mine because the marriage was quite short and she told me if it’s a boy, I’m gonna name him Larry King Jr., then I never heard of him again.”

However, the matter is quite in hands now as Larry, and his son are often spotted together, and it seems that the bond is growing stronger day after day.

Currently, Larry King’s son Larry Jr. is a family man and has three children of his own. Larry Jr. is married to his wife Shannon King and is also working as the head of King’s heart disease foundation in California. However, the names of Larry King jr.’s children have not been disclosed yet to the media.

Larry King Jr.’s Father Had Suffered From A Heart Disease

Larry King had suffered a major heart attack in 1987 and went for bypass surgery. Since then, King has written a book titled, “Mr. King, You’re Having a Heart Attack: How a Heart Attack and Bypass Surgery Changed My Life” about living with heart disease. Later in 2017, King discovered a cancerous tumor in his lung, which was successfully removed with surgery.

As mentioned earlier, Larry King’s son is working as the head of King’s heart disease foundation.

Death is a painful experience for those alive and especially for a father in their 80s. The veteran tv host, Larry King experience two sudden deaths of his son, Andy King, and daughter, Chaia King on July 28 and August 20 respectively.

King’s son, Andy died of a sudden heart attack while Chaia followed shortly after being diagnosed with lung cancer. Larry confirmed the saddening news via a Facebook post and was thankful to everyone for their approach.

Larry is a boy’s name which gives the meaning of “from Laurentium.”