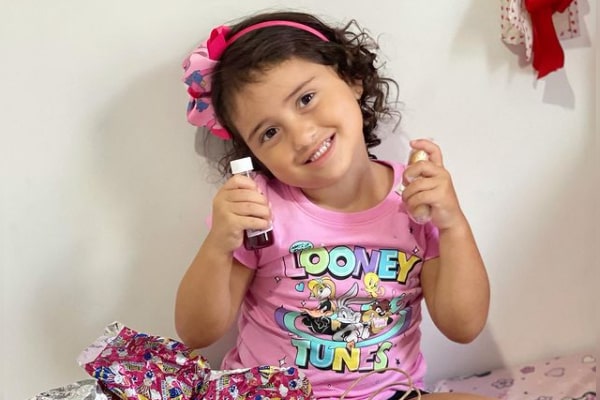 Charles Oliveira da Silva is a decorated mixed martial artist fighting in the lightweight division for the Ultimate Fighting Championship. A professional from 2008, the 31-year-old holds the record of the most submissions in the UFC. He recently became the UFC lightweight champion.

Aside from mastering the art of Brazilian Jiu-Jitsu, the UFC fighter is married and is a proud father. Do Bronx married Talita Roberta Pereira, his long-time lover, on the 15th of March, 2014.

They gave birth to a daughter sometime around late April in 2017, whom they named Tayla Oliveira.

Below, let’s dig up on Charles Oliveira’s daughter Tayla Oliveira to know her better.

Both Her Parents Are BJJ Practitioner

The UFC lightweight champ and his wife Talita Roberta are both from Guarujá, Brazil. Tayla’s father is an MMA fighter, while her mother works in a hospital.

Other than that, the love birds are also decorated and skilled Brazilian Jiu-Jitsu practitioners. Do Bronx who defeated UFC’s boogeyman, Tony ‘El Cucuy’ Ferguson, is a 3rd-degree blackbelt in BJJ.

As for Tayla Oliveira’s mother, her level is not known. Regardless of that, Talita Roberta is a Centro de Treinamento Charles Oliveira Gold Team teacher, which her husband owns.

Often appearing on her parent’s social feeds, young Tayla’s simple lifestyle is captured and shared with the public through her Instagram.

Many would consider this sort of act may create problems for the child when she grows up. Since her lifestyle is shared from the very beginning, it is up to Tayla’s parents to decide whether to continue.

Regardless of all that, the four-year-old’s Instagram has 1.3K followers, mostly filled with 30-8-0 fighter’s fans.

By looking into her social profile, Talita Roberta’s daughter is an outgoing child. Unlike most kids today, who prefer staying indoors with their electronics, Tayla Oliveira is completely the opposite.

The UFC record holder’s daughter enjoys going to the beach and spending time with her siblings. Most of her siblings are of the same age group, which works as a plus point.

Enjoy the weekend with your family.

The four-year-old, Charles Oliveira’s daughter also has a wardrobe filled in with her cute and small beach attires. She also spends time at her family’s gym and is an animal lover.

If you go through the little one’s social media, you’ll know that she is into swimming. At the tender age of 4, Tayla Oliveira is swimming with no safety tubes.

Oliveira’s princess is not afraid to jump in the pool and even swims at the seaside.

Pink Is Her Favorite Color

Similar to many girls of her age, Tayla Oliveira is also fond of the color pink. Pink clothes have filled her wardrobes and outfit selections.

Since pink is the color representing princess, it is unquestionably the Disney lover’s favorite color.

Oliveira’s little one also has a pink-themed bedroom and playhouse in the form of a tent. Adding to her collection, Tayla also has a pink toy car and a surfboard, which she takes on her beach days.

On her 3rd birthday, she dressed as Snow White, keeping the pink away and donning the classic blue and white.

The Guarujá native is a massive Disney fan like most kids in their childhood. Despite loving Disney princesses like Elsa and Snow White, Tayla prefers Minnie Mouse the most.

The longtime sweetheart of Mickey Mouse has been the favorite of the UFC fighter’s daughter. Going well with her pink bedroom, it is also themed with Minnie Mouse.

Tayla Oliveira also has a collection of Minnie Mouse merchandise, including soft toys and the classic pink bow.

Nevertheless, Tayla Oliveira is a wonderful daughter of the UFC champ and Talita Roberta.

We hope to see more of Tayla in the days to come since the Brazilian mixed martial artist became the UFC lightweight champion by defeating Michael Chandler.

We wish the very best to Tayla Oliveira for the future and hope to see her follow in her old man’s footsteps.

Tayla is a girl name of British origin with the meaning “Gift of God”.