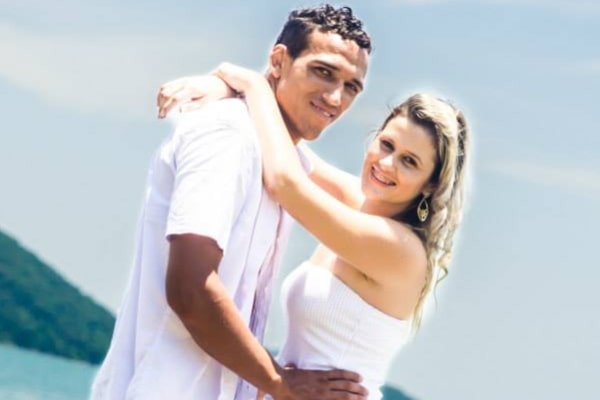 Charles Oliveira da Silva is a Brazilian mixed martial artist competing in the Ultimate Fighting Championship as a lightweight contender. Charles, also known as Do Bronx, has multiple UFC records; the most notable is the number of submissions in the organization’s history at 14. He recently won the UFC lightweight championship.

A professional since 2008, the fighter has received 16 end of the night bonuses. Some of his noteworthy victories are over Kevin Lee, Clay Guida, Jim Miller, Jeremy Stephens, and former interim UFC lightweight champion Tony Ferguson.

Aside from being involved in the MMA business, Oliveira is a proud husband and a father. Married to Talita Roberta Pereira since 2014, below let us talk about Charles Oliveira’s wife to understand her better.

Who is Talita Roberta Pereira?

Talita Roberta Pereira is a fellow Brazilian from Guarujá. Charles Oliveira’s wife is currently working in Hospital Casa de Saúde Guarujá, but her post is not clarified.

The mother of one is also a gym instructor/trainer at her husband’s training center, Centro de Treinamento Charles Oliveira Gold Team. Talita has always been living a busy life and worrying about her husband’s health.

Being a Brazilian Jiu-Jitsu practitioner has helped her cope with her husband’s involvement in the hurt business.

The natural blondie attended Unaerp Guarujá for her high school and is part of an extended family filled with siblings.

The UFC champ and his wife Talita Roberta Pereire go way back. The partners were long-time lovers before tying the knot on the 15th of March, 2014.

They were already dating when the UFC record holder made his professional debut at Predator FC-9 in 2008. Since it is a custom in Brazil to learn the art of Brazilian Jiu-Jitsu, the love birds might have met for the 1st time in a gym.

Apart from that, Talita is a wonderful companion as she has stayed through thick and thin with her 5’10” fighter husband. Oliveira is always thankful for how she has taken care of him and even acknowledges it in most of his interviews.

Oliveira Announced The Marriage In A Post Fight Interview

After back-to-back losses, courtesy of UFC’s Frankie Edgar and the killer Cub Swanson, Do Bronx finally jumped to the winning column and announced his marriage.

On February 15, 2014, the fighter announced after submitting Andy Ogle by a triangle choke. The event was held in Brazil, which was the perfect place for Talita’s husband to confirm their marriage. He said –

“I finally won and now I am going to marry the woman who’s been with me since day one. It will improve and add more value to our life. Today’s victory will help me in the wedding and also on my honeymoon.”

Talita Roberta Pereira’s husband, Charles, also took the performance of the night bonus, making it one of the best fights of his career.

Blessed With A Daughter

Shortly after the wedding, the 3rd-degree black belt in BJJ and his wife Talita were blessed with a beautiful daughter, Tayla Oliveira.

Young Tayla is the only child of Roberta and her husband to date. The couple even made her an Instagram page for her, where they often post regarding her day-to-day activity. Their firstborn may not have inherited her mother’s blonde hair but somehow have similar faces.

Other than spending time with her parents, Tayla enjoys swimming and the beach.

Talita Roberta Pereira, similar to her husband, is a Brazilian Jiu-Jitsu practitioner but to what degree or extent is not yet revealed.

You can find Charles Oliveira and his wife Talita training in Guarujá’s very own Centro de Treinamento Charles Oliveira Gold Team. Both the partners are teachers, and by looking into the gym’s profile, it has a family environment.

Once Ran An Online Apparel Store

The duo had custom-made clothing designs as the signature product and also a couple of beauty products. Though Tayla’s mother has removed herself from the occasion, her friend Kafy is still running the business.

With all that said and done, if it weren’t for Charles Oliveira’s wife Talita Roberta Pereira, he wouldn’t have established himself as a great mixed martial artist.

Charles Oliveira faced fellow UFC contender Michael Chandler in UFC 262 for the vacant UFC lightweight championship which he won in the second round. We hope he is guided and supported by his wife like always.