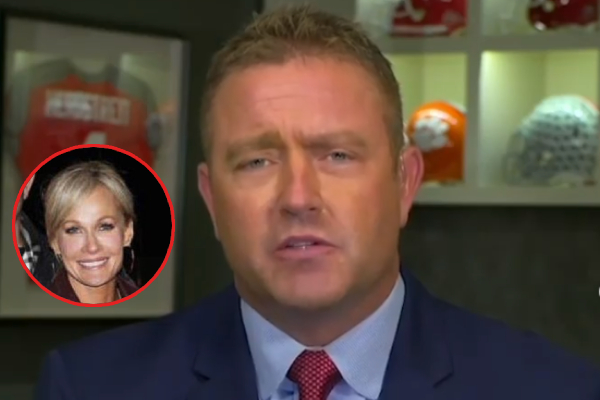 Kirk Herbstreit, the analyst for ESPN”s College GameDay, is not a new face in college football. The former quarterback of the Ohio State Football Team might be enjoying his work in football but has faced a reasonable amount of hate.

The color commentator is disliked by the general masses for his football antics and his marital drama with Alison Butler. Although contributing largely to the sport, the ESPN and ABC veteran has always been tagged as an unfaithful partner.

With all that said, let us look into Kirk Herbstreit’s wife and her love life with the ESPN analyst and how things went sideways.

Both Kirk and Alison attended the Ohio State University, where they became college sweethearts. The voice of the EA Sport’s NCAA series was a quarterback of the Ohio State Football and his future wife, the star cheerleader.

The sporty couple would date for four years before tying the knot. The typical high school movie love story turned out well for both, just like in the movies as they shared their vows in 1998.

Alison Has Four Sons With Kirk

There were rumors on the Buckeyes player having affairs evaporating even during the time of his wedding. With all the rumors kept aside, the lovebirds have four beautiful babies from their rocky relationship. All of Alison and Kirk Herbstreit’s children are boys, and two of her firstborns are identical twins.

Like their father, the Herbstreit boys are already involved in amateur football. But unlike Alison’s husband, they might play professionally since Kirk Herbstreit’s sons have exhibited good numbers in the college league, excluding the youngest born Chase.

After his days for his alma mater, the go-to guy for college football commentary, Kirk got his big break while working on a radio station where he established himself as a sports analyst through various networks. Alison’s husband didn’t have kind words for his alma mater despite Ohio State University establishing his base as a football player.

It is the job of the analyst to share an honest opinion, but the Buckeyes fans weren’t too kind. They made life difficult for the Herbstreit knowing that one of their own was criticizing them on national TV.

According to Kirk Herbstreit’s spouse, vehicles were stopping by their porch and driving off most of the time. The situation worsened when a publication gave Kirk’s home address with google map details.

The five-time Sports Emmy Winner recalls his wife calling him crying, which was enough for him to shift to their new home in Tennessee.

What Does Kirk Herbstreit’s Wife Do?

Regarding Alison Butler, there is very little information available. The mother of four has no details regarding her profession or even her interest. She only gathered public attention after her husband, Kirk, had his breakthrough.

We know that she is an athletic individual since she was in the cheerleading squad of the Ohio State University.

As mentioned above, Kirk Herbstreit has never been a good partner, so much so even on his wedding day, the father of four was surrounded by affair speculations. We are not sure how much it has affected Kirk Herbstreit’s partner and their relationship, with whom he has been sharing the roof since 1998.

Interestingly, Alison Herbstreit’s husband refused to make any comments regarding all the rumors and speculations. But the following two names are heavily linked with the Ohio native.

The natural blonde, Erin Andrews, is a fellow sportscaster for ESPN alongside Alison’s husband. The rumor of the co-workers having an affair skyrocketed, grabbing the public’s attention in 2007. The sportscasters have never made any comments concerning the matter despite the rumors resurfacing often.

It has reached the extent that the sports pundit and the pretty sportscaster can’t even talk normally in public. The 42-year-old later moved to FOX sports parting ways with ESPN and the rumors in 2012.

When rumors of his affair with a police officer’s wife surfaced, and Kirk’s faithfulness was questioned again. Alison’s husbands’ public image was already ramshackle, and his affair with the wife of James Dunlaw, who is a veteran of the Columbus Narcotics Bureau, only made it worse.

There was no concrete evidence behind these rumors, and both the commentator and his wife have refrained from talking about it with the media. Let’s hope the rumors don’t have any semblance of truth to them, and Kirk is faithful to his partner.

All rumors kept aside, both Alison Butler and her husband Kirk Herbstreit are still together. Although the rumors about Kirk Herbstreit’s extramarital affairs must have triggered the speculations of his divorce from the long-time partner, the college lovers are yet to confirm the news themselves.

Rest assured, the college sweethearts are still together, but with many rumors often surfacing regarding Kirk’s affair, we wonder whether it is healthy for Kirk Herbstreit’s wife and his sons. We can assume their four sons as the reason why they are still together.

Alison Butler and Kirk Herbstreit’s future together is not sure, but their time together has surely been wonderful as the high-school sweethearts-turned husband-wife has given life to four babies, including twins. We only wish the best for what is to come in the Herbstreit household, hopefully not any extra rumors.