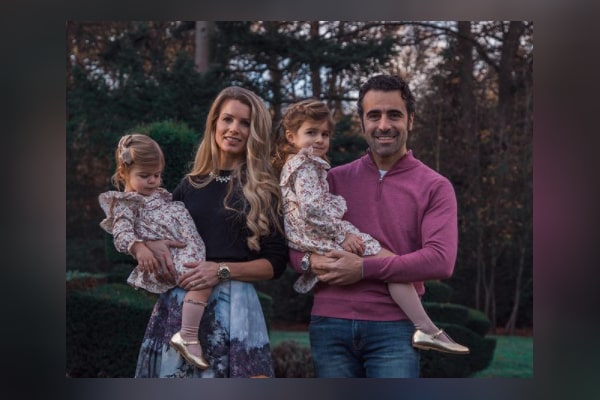 Dario Franchitti, the MBE medal holder, is a world-renowned racing driver from Scotland with Italian ancestry. The four-time IndyCar Series champion, three-time Indianapolis 500 winner, and the winner of 2008’s 24 Hours of Daytona is married to Eleanor Robb.

Sadly, the adrenaline junkie had to bring an end to his racing career after a terrible car crash in 2013’s Grand Prix that left him with a broken back, fractured right ankle, and a concussion. All this occurring happened just after a couple of months separating from his first wife.

Despite ending his marriage with Ashley Judd, Dario is able to keep a good relationship with her. With that said, let us have a look into the key highlights of the four-time IndyCar champion’s love life.

What we know about Eleanor Robb’s personal life before her relationship with Dario is very minimal. The hedge fund executive is a mother of two and involved in various business funding-related matters.

A hedge fund basically refers to an offshore investment that is formed as a limited partnership. It also engages speculation using borrowed capital and an executive of such a firm is rumored to be earning around nine figures yearly.

We are not sure whether it is the same or similar with Eleanor Robb but what we can confirm is that she was able to meet different personalities due to this. One such personality is racer Pippa Mann who might have handed the key to her happiness.

Tying their knot sometime around 2015, just after a couple of years from the horrendous 2013, Dario and Eleanor sure did rush into things. Pippa Mann, a fellow IndyCar racer, was the one to introduce Dario to Eleanor following the British Empire medal holder’s divorce.

The popular racing driver and the hedge fund executive would not carry the boyfriend-girlfriend titles long as they soon became husband and wife. Dario acknowledges that retiring from the sport has made him spend time connecting more with his wife than his previous partner.

The Vast Difference In The Weddings

Dario and his ex-wife Ashley Judd were at their prime when the couples tied the knot. The Hollywood star and the Scottish native married lavishly on the 21st of December in 2001. The former couple tied the knot at Highland Town in Scotland following two years of engagement, where they nearly spent around $1.8M. The lavish ex-couples also had a $1.7M house in Rednock, Stirling-shire.

Dario Franchitti’s marriage with Eleanor Robb was opposite to his previous. The private ceremony was held in a low-key manner with minimum guests only comprising family and friends.

Eleanor Robb was never married unlike her husband Dario who had tied the knot once before. Dario Franchitti’s ex-wife, Ashley Hudd is an actress whom he first met at actor Jason Priestley‘s wedding in 1999. They dated for a couple of years before finally marrying in 2001. However, their relationship lasted 11 years and the former couple moved on with their lives.

Nowadays, Ashley has no time for love, but she had her own fairy tale life when she did. Both Judd and Franchitti were at the peak of their careers during their 11 years of togetherness.

But the ex-couple would shockingly make a joint decision of legally separating in 2013, which included –

‘We have mutually decided to walk our separate ways. We’ll always be a family and continue to cherish the relationship we had with love respect and integrity.”

As of today, both Dario and Ashley keep a good and healthy relation as friends. So much so that the Hollywood sweetheart is the godmother to Eleanor and Dario’s firstborn.

The 1992 McLaren Autosport Award winner may have retired as a pioneer to the sport, but the race with life is far from over. Shortly after marrying, Eleanor Robb and her other half gave birth to a baby girl, Sofia Franchitti. The firstborn has similar looks to her mother and has even inherited her blonde hair.

Surprisingly, the 5-year-old has built interest in racing just like her father, but unlike Eleanor’s husband, his gorgeous little one is into bike racing. The 2019 Motorsport Hall of Famer often shows his daughter’s riding skills on his social media.

Eleanor and Dario extended their family in February of 2019 by welcoming another kid. Valentina Franchitti, the second daughter in the family, like her sister, also has blonde hair. The beautiful four-year-old is a regular face on her parent’s social media and likes spending time with her siblings.

Eleanor Robb and her husband might have rushed into things, but it sure did turn into a positive move. The couples now have two wonderful daughters to look after and share more memories together.