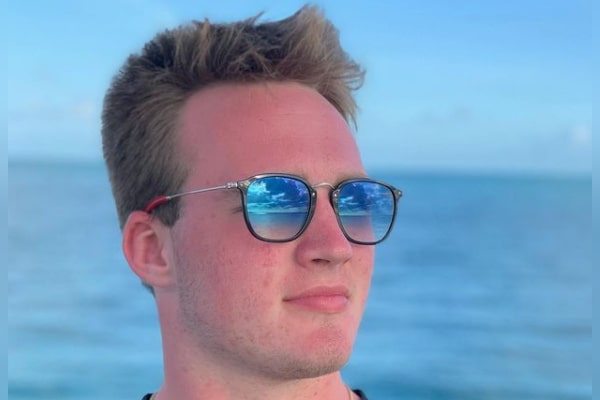 Zak Herbstreit is ESPN’s long time analyst; Kirk Herbstreit’s son. The third out of four Herbstreit children was born sometime around 2003 and there was no doubt that Zak would follow his parent’s footsteps into sports and athletics.

Without any further ado, let us try to have an understanding of who Zak Herbstreit really is, apart from being the College GameDay host’s son.

As mentioned above, the 6’2″ athlete is Kirk Herbstreit’s son, the go-to guy for college football. His mom, on the other hand, is Alison Butler, an Ohio State University Alumni. The mother of four was a former cheerleader, while her husband was a quarterback for Ohio Buckeyes.

Zak’s father, Kirk, contributed massively to the Buckeyes team by captaining them. He has since transferred his focus to sports commentary, where he uses his football knowledge. Without a doubt, it has to be Zak Herbstreit’s parents from where he got his incredible athleticism.

Zak Herbstreit is the third son of Kirk Herbstreit out of four. His elder brothers, Jake Herbstreit and Tye Herbstreit, are identical twins. The twins also play in the college football association, but unlike Kirk, Jake and Tye ended up representing Clemson over Ohio State.

Chase Herbstreit is the youngest of Kirk Herbstreit’s sons. Like his siblings and parents, little Chase has also established an interest in sports, and there is no doubt that Zak’s younger brother will also play football in the future.

It was shocking when news broke that Kirk’s eldest twins chose Clemson over the Buckeyes. Kirk Herbstreit was full “Ohio Till I Die,” as he captained the Buckeyes as a quarterback through his illustrious college football career. However, Zak’s eldest brothers now represent Clemson and receive friendly jabs from the whole family.

On the other hand, Zak Herbstreit kept up with the family legacy and committed to Buckeyes which was a big relief for his father. While the ESPN analyst is still happy for the twins, Zak choosing to follow in his footsteps has made him pretty happy.

Throughout the article, we have mentioned how much football has inspired the Herbstreits. Zak’s dad and grandfather are former football players, his elder brothers are college football players, and his mom is a cheerleader. But aside from football, the senior tight end has other interests, which we shall discuss below.

The Nashville native is also an excellent lacrosse player as he is in the Montgomery Bell Lacrosse team. The oldest organized sport in North America is played with a stick and a ball with somewhat similar rules to baseball.

In what has become an annual tradition, #1 @ZHerbstreit stepped into goal during our first 3v2 of the season pic.twitter.com/i7TAx4ofQG

But the senior tight end’s chances with lacrosse seems slim as now he will be playing amateur football.

Out of all Kirk Herbstreit’s sons, Zak and Chase seem to be more like their father. You can see Kirk taking his boys for fishing either on the sea or on a pond. The soon-to-be Ohio State Footballer also posts pictures of them fishing and enjoying the family bonding.

The former cheerleader’s son is not only sporty but also has a very outgoing nature. Zak Herbstreit is not only seen enjoying fishing but also is an adrenaline junky. Skiing is often his escape from football but not from his brothers.

The 6’2″ athlete is mostly seen with his brothers rather than his friends as he seems to enjoy more with his family.

Though the TV presenter has three other sons, his middle child, Zak Herbstreit, has gathered the most attention. Not only for being Kirk Herbstreit’s son but also for continuing the family tradition.

Regardless of leaving Ohio state because of the pestering fans that kept creating problems for the Herbstreit household, the middle child has committed to play for where he once lived.

We are not sure how the Ohio fans will receive Zak Herbstreit, but with his performance and resume to back him up, he sure can be a fan favorite. Before the season kick starts, we wish the best for the newly signed Buckeyes player the best for his football career and in general.

Zak is a boy name with Hebrew origin; it means “laughter” or “the Lord recalled.”