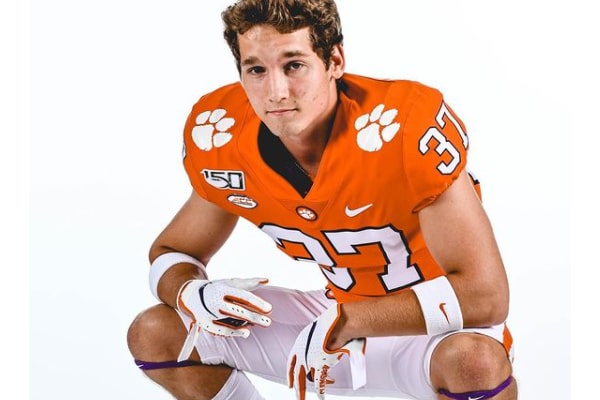 Jake Herbstreit is one of Kirk Herbstreit’s sons, who also has a twin brother, Tye Herbstreit. The son of ESPN’s College GameDay analyst is already playing college-level football as a safety following in his father’s footstep.

Born on the 18th of June, 2000, Jake made his debut on amateur football in 2020. Without any delay, let us look into Jake Herbstreit with regards to his personal life to understand him better.

Kirk Herbstreit met his soon-to-be wife, Alison Butler, at Ohio State University, where they fell in love. The football analyst is not only the man in the studio but was once a player himself.

The 5-times Sports Emmy Winner used to play as a quarterback for Ohio’s very own Buckeyes, which he would eventually end up captaining. As for Jake’s mother, Alison Butler was a cheerleader for Ohio state.

It’s a huge deal in college when the football team captain is dating the cheerleader. The sporty pair might have had a rocky marriage life, but they sure did receive massive attention when they started dating.

As mentioned above, Jake Herbstreit has an identical twin brother, Tye Herbstreit. The other twin also plays football in the wide receiver position for Clemson Tigers, the same as his brother.

The twins are known for their similar looks and their excellent chemistry in the field. Both the twins have played together for most of their lives, making their connection at a top-level.

Also Read: NBA YoungBoy’s 8 Children And One More Rumored On The Way

The twins might be the firstborn of Kirk Herbstreit’s sons with Alison Butler, but two other footballers follow them. Zak Herbstreit, the middle child, is also a talented prospect in football who is looking forward to his college debut.

Born only after a couple of years from Jake, the 6’2″ senior tight end has gathered the most attention since he joined the Buckeyes and is carrying the family legacy.

The youngest Kirk Herbstreit’s son, Chase Herbstreit, is the center of attention in the family, so much so he even is a regular face in his father’s office. Young Chase currently plays as a dual-threat quarterback for St. Xavier’s High School and is a huge Buckeyes fan.

Jake is very open regarding his personal matters, unlike his twin brother. Jake Herbstreit is living the moment with his partner Hannah Roberson, who is a social media influencer.

Jake Herbstreit’s girlfriend Hannah is a Nashville native, same as Jake, and can be seen traveling together often on their social media. Kirk Herbstreit’s son looks fully committed like he is with football, but his other half hardly posts any pictures of them together.

The Nashville native is a natural blonde and flaunts a very tanned skin tone. On the other hand, the 5’11” player is a proud boyfriend and enjoys spending quality time with her. Jake has also introduced the influencer to the Herbstreit household and even attends family functions together.

Deciding to play for Clemson Tigers in his college career might be one of the toughest decisions the 20-year old might have made so far. The family legacy of playing for the Buckeyes has existed for three generations as Kirk Herbstreit and his father, Jim Herbstreit, committed themselves to the Ohio State team.

Apparently, Jake is not the only Herbstreit who would be donning the orange and white jersey as his twin brother Tye would join him. During the time, many media outlets had confirmed the twins as the perfect match for the Tigers to better their performance, which they did eventually.

Jake even shared his thoughts to Clemson Insider regarding his father.

Obviously, exploring away from the family’s custom surely shocked Kirk Herbstreit, even leaving him heartbroken for some time. But as life went on, the go-to college football guy would support them for their choices.

Aside from football, Jake Herbstreit is a very outgoing person. He enjoys spending time with his family and especially his brothers. The Herbstreit household is divided as the twins play for the Tigers and their brothers are diehard fans of Buckeyes.

Jake, talking to Clemson Insiders, mentioned how going home on holidays means plenty of smack talks, which works as his driving factor. Nevertheless, there is no hatred among the brothers, and most importantly, they look up to each other.

Other than that, the Nashville native also enjoys traveling. Either with his family or just with his gorgeous girlfriend, Jake has been to some beautiful places. Looking into his social media, we can figure out that Clemson’s safety mostly prefers traveling to hot climate places. The uprising star is also very skillful with fishing.

Jake Herbstreit, so far into his college career, has been performing in good form. Regardless of all the media attention and hype behind both him and his twin brother Tye, they have never failed to deliver.

We wish the best for the upcoming rising football star and the very best for his college career and hopefully soon transition into NFL.

Jake is also a short form of Jacob and is a boy name of Hebrew origin which means “supplanter.”