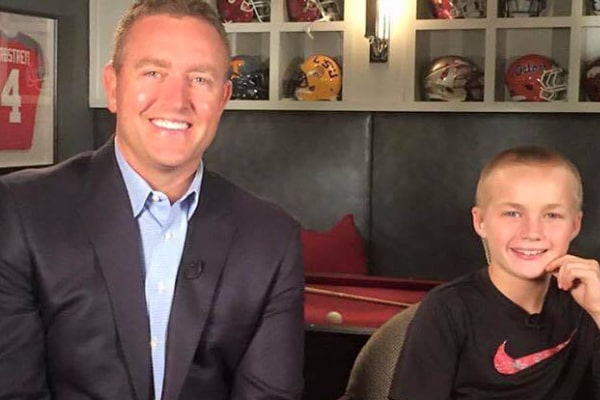 The ESPN analyst Kirk Herbstreit and his wife, Alison Butler, have given birth to a bunch of athletic kids who are not only playing football but are also carrying the family legacy. Chase Herbstreit, the youngest of Herbstreit’s sons, is a gem to look forward to. The baby of the family was born sometime in 2006 and has already shown a talent for football like his brothers.

So, today, let’s discuss a little about Kirk Herbstreit’s son, Chase Herbsttreit, and try to understand the upcoming talent.

Both Of Chase’s Parents Are Athletic

Kirk Herbstreit’s son, Chase, may have just begun his footballing career, but the involvement in the sport has existed for generations in the family. As for the Nashville native’s parents, Kirk was a former captain and quarterback for Ohio State University’s very own Buckeyes.

On the other hand, Alison Butler was a cheerleader for Ohio State University, where she met her future husband. Due to such athletic genetics, their youngest one is the next “football star” in the making.

ESPN’s College GameDay host is never short of famous personalities in the show. However, fans love when Kirk’s children are present in the show. All of Kirk Herbstreit’s sons have appeared in ESPN, Chase being the most frequent visitor.

We can assume Chase’s free time is the reason why his dad tags him along as his other brothers are busy with college football. Plus, when Chase was born, Kirk had finally secured the position as the leading man for college football.

That led the five-time Sports Emmy Winner to have more authority, due to which he could bring in Chase anytime without much interference. The youngest one has been around major sports analysts like Lee Corso, Rece Davis, and Desmond Howard, to name a few.

As mentioned above, Chase Herbstreit is the youngest son of Kirk Herbstreit. Being the youngest one has allowed Chase to get more attention and care, especially from his brothers.

Chase’s eldest brothers, Jake Herbstreit and Tye Herbstreit, are identical twins. Both of them are already in college and playing for Clemson, which left their father, the “Ohio Till I Die” fan, shocked and a bit heartbroken.

But unlike the twins, Chase’s other brother, Zak Herbstreit, has committed himself to join the Buckeyes, continuing the family legacy. Chase is never left alone and is even guided and trained by his brothers. You can see the love and appreciation the brothers have for their young sibling Chase often in their social media.

The dual-threat quarterback has already gathered a lot of attention not just by being Kirk Herbstreit’s son but also for his game. Currently playing for St. Xavier’s High School, different colleges have shown interest in Chase.

Though graduating in 2024, Kirk Herbstreit has already made sure where his son will end for college. Knowing who he is, you already might have guessed it might be someplace starting with an O.

Since there is time, it is up to the 5′ 2″ footballer to decide where to take his talents. He can either be explorative like his twin brothers or continue the Ohio trend like his other brother, Zak. Whatever path he chooses in the future will definitely be fruitful for the young Herbstreit.

Aside from making appearances at his father’s job, Chase enjoys quality time with his brothers by fishing and skiing. Kirk Herbstreit has instilled a love for the outdoors in his sons. And he is surrounded not only by his football-playing sons but also by his lovely golden retrievers.

The Herbstreit family has around 4-5 golden retrievers, as seen in their social media pages. As a result, Kirk Herbstreit’s youngest kid, Chase Herbstreit, is seen taking the dogs on walks and hikes with his father and brothers tagging along.

Grew Up In Front Of Media

Having three sons already in the football industry, Kirk and Alison might expect the same from their youngest one. As for Chase Herbstreit, who is finally entering his high school days has always been in the eyes of the media.

.@SportsCenter had a great time today with the beautiful @lindsayczarniak!!!

Chase Herbstreit has grown up in front of the people’s eyes, unlike his brothers as he has accompanied his father to his shows. Therefore many College GameDay viewers are invested in the youngster’s lives. Let’s hope Kirk Herbstreit continues to bring his youngest son to work and keep his audiences updated on his life events.

We are unsure whether Kirk’s smallest kid had problems in his upbringing after all the media attention or whether it worked as a pushing point. We only wish the best to the upcoming star for his future and especially for his football career.

Chase, originally an English surname, was used mostly during the middle ages as a nickname given to hunters. It is used for both girl and boy child making it a unisexual name.