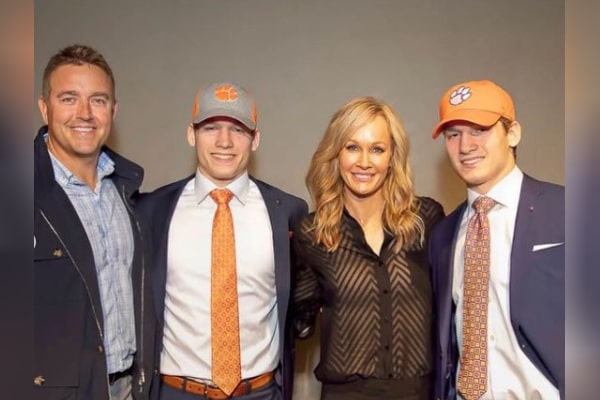 Tye Herbstreit is one of Kirk Herbstreit‘s children and is an identical twin to Jake Herbstreit. Born on the 18th of June, 2000, Tye is as much of a player as his father once was.

Alison Butler and Kirk Herbstreit’s son, Tye Herbstreit, is a college football player and made his debut in 2020. Without any further ado, let us look into Tye Herbstreit and try to understand him better.

The ESPN College GameDay analyst is all about college football when it comes to sports. Tye’s father, Kirk Herbstreit not only played as a quarterback for Ohio’s very own “Buckeyes” but was also the captain of the team. The voice of EA Sport’s NCAA series is the go-to guy for college football, so much so all his four sons are into the sport.

As for Kirk Herbstreit’s wife; Alison Butler also attended Ohio State University alongside him. The mother of four Herbstreit boys, including the talented football player, was a cheerleader and would spend most of her time in the field cheering for her future husband.

Apart from the family name, Tye is also recognized as one-half of the Herbstreit twins. Jake Herbstreit is not only Tye’s twin but also an identical twin. The sport’s analyst is a proud father of the two hunks who look the same and is set to make him proud in the coming days.

Unlike Tye, Jake is much more open in nature. Taking an example of their social media, you can see Jake’s Instagram is public, and Tye’s is private. There is already much attention gathered from becoming Kirk Herbstreit’s child, and we must respect the fact of Tye being reserved.

More or less, you can see Tye fooling around and having quality moments with his brothers on their social media.

Jake Is Not His Only Brother

The long and illustrated marriage of the former cheerleader and the five-time Sports Emmy Winner led them to give birth to four children. Jake might be Tye’s identical twin brother, but he is not the only one.

The other Kirk Herbstreit’s son; Zak Herbstreit, was born only a few years apart from the twins. The 6’2″ football player is committed to Buckeyes unlike his brothers and plays as a senior tight end. The middle child also played lacrosse for Montgomery Bell Academy.

After Zak, the youngest in the family; Chase Herbstreit is a dual-threat quarterback playing for St. Xavier’s High School. Young Chase like his elder brothers also has committed to football gathering much more media attention at a very young age.

All of Kirk Herbstreit’s children enjoy each other’s company and are always guiding one another.

Parting Ways With The Family Legacy

The Herbstreit family custom might be playing football but their legacy is completely different. As mentioned above, Kirk used to captain and play for the Ohio State University. Similar to the TV personality, his father or Zak’s grandfather, Jim Herbstreit also played for the Ohio State Buckeyes.

Tye rather than following in his father’s footsteps would take his talents to Clemson University in South Carolina. Even his twin brother Jake would go for the same line alongside him. He even gave an interview for the Clemson Insider, sharing his thoughts on how his dad took his decision.

Tye’s father revealed the news in November of 2019, though the Ohio fan didn’t go deep, he stated –

“My sons are going there as walk-ons and Clemson’s culture played a big part. As a dad and as a broadcaster, I’ve been lucky to get behind the scenes at Clemson for the last few years and trust me I was blown away. The culture and the entire staff are at their A game. You need to go there to understand it.”

Although expecting his sons to be part of Buckeyes, Kirk is happy and supports their decision. Currently, the wide receiver of Clemson Tigers is making a name for himself in the college football scene. And let’s hope we get to see the Herbstreit boys in the NFL soon.

The Wide Receiver’s Other Interests

The orange and white donning Tye is never shy about expressing his thoughts regarding his choices. Although the Nashville native is discreet and reserved, there are a couple of instances where he has gone loud.

Electronic Arts have given us a variety of sporting games which has had major global success. As for Tye, he not only is a college football player but also a player within the console. The 5’11” athlete enjoys playing EA Sports’ Madden NFL series and also NCAA Football in his early days.

Since EA is bringing back the college football in the next NFL game, Tye is all excited and pumped as he will be part of the game’s roster.

The 20-year-old is also a follower of the uprising mixed martial sports. He is a huge Conor McGregor fan and is very vocal about it. Kirk Herbstreit’s son apart from playing football in reality and virtually enjoys watching combat sports.

Since the former two-weight class champ is finally fighting on a regular basis, it might be a treat to the eyes of Clemson’s no.7.

Tye enjoys the most being around his family like all of Kirk Herbstreit’s kids. The Montgomery Bell Academy alumni is seen vacationing around with his family, either hiking or enjoying fishing on a cruise.

Things haven’t reached extreme levels even though the house is divided as the twins are playing for Clemson and the other two die-hard Buckeyes fans. All four brothers share their experiences and always give tips to each other.

Already rocking Clemson Tiger’s no.7 and making headlines in the college football segments, Tye Herbstreit is a bright upcoming talent to look forward to.

As the wide receiver is already excelling at the amateur level, we wish the best for the star athlete in his professional career and hope that he opens up about his life in the coming days.

In English Tye is short for Tyson but originally is derived from Celtic meaning ‘Land of Eoghan’.