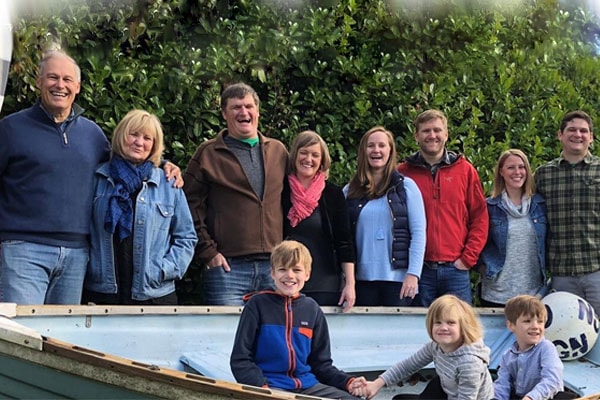 Jay and his beau Trudi tied the knot on August 27, 1972. Jack Inslee, Joe Inslee, and Connor Inslee are famous as the sons of Jay Inslee, the 23rd governor of Washington.

Jay Inslee’s son Jack Inslee is a record producer, audio engineer, and a DJ. He is also the founder of Full-Service Radio. Full-Service Radio broadcasts live from the lobby of the LINE DC. It is a podcast network and internet radio station.

Jack Inslee has put his effort into launching Heritage Radio Network which is an independent food-talk radio station. He was also the network’s Executive Producer from 2009-2016.

Jack Inslee performs as well as produces music on Northern Spy Records. He works alongside his partner Odetta Hartman who is a singer-songwriter.

Joe Inslee Is An Outreach Specialist

Joe Inslee is an Outreach Specialist at King County Parks – Your Big Backyard. He also works at  National Oceanic and Atmospheric Administration (NOAA).

Joe is working towards protecting the environment. His professional career focuses on enhancing the lives of communities by providing environmentally sound stewardship. Partnerships and entrepreneurial initiatives also support regional and rural parks, trails, and recreational facilities.

Joe’s father Jay Inslee has also been emphasizing on his legal experience supporting local average people, farms, and businesses. His campaign still focuses on outlining dozens of proposals to increase job growth in clean energy as well as the aerospace industry. It is also focusing on job creation and biotechnology.

Joe Inslee and Jack Inslee like keeping their personal information private. However, Connor Inslee is extremely secretive. He is not active in social media neither any information about him is available.

Jack is a name which was derived from Jackin which was earlier known as Jankin which is a medieval diminutive of John. As it was very common in the middle ages, the word became slang for the word man. Jack is an independent name which was frequently used in fairy tales and nursery rhymes.

English baby name Joe means Abbreviation of Joseph. However, in Hebrew, it means to add or to increase. Conner is an Irish name which is given to a male child. Conner is anglicized from the compound Irish word Conchobhar which means lover of hounds. Inslee is a legal name that Jack, Joe, and Conner have received from their father Jay Inslee.