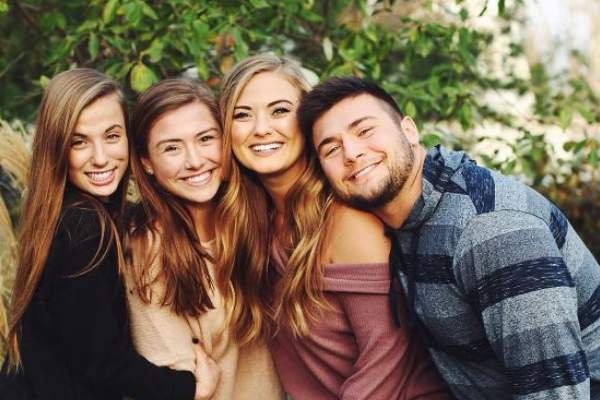 Having been in the sports industry since 1988, Chris Spielman needs no introduction to sports fans, especially football enthusiasts. To those who have zero ideas about who he is, Spielman is a former American football player who played for different teams like Buffalo Bills, Cleveland Browns, and Detroit Lions. Furthermore, he is currently known for being a special assistant to the National Football League (NFL) team, Detroit Lions’ owner and CEO.

Well, the three-time All-Pro for Lions, Chris is a proud father of four kids. He and his late wife, Stefanie Spielman, welcomed them, and all of them have grown up. So, in today’s article, let’s know what Chris Spielman’s children are busy with and more about them.

The former football player met his late wife in 1982 while still in high school. The couple’s first encounter occurred in Stark County’s teen dance club. Stefanie was his only girlfriend from their first meeting until they married. After being in a relationship for many years, the lovebirds shared their wedding vows on June 24, 1989. Later, the pair welcomed four children.

Madison Spielman, aka Maddie, is the eldest, whom the duo welcomed in 1994. Then arrived Noah Spielman in April 1996. Afterward, Stefanie gave birth to Macy Spielman on January 8, 2001, and Audrey Spielman in 2003. Furthermore, all of Chris Spielman’s children are now busy in their professional careers, so let’s find out more.

Madison Has Continued Her Mom’s Legacy

In November 2009, the Spielman siblings lost their mom to cancer. Having survived four bouts, she passed away after the disease occurred a fifth time. Chris Spielman’s daughter, Madison, the alumna of The Ohio State University, started to work in marketing at The James Cancer Hospital and Solove Research Institute. It is a place near to their hearts as their late mama fought her battles with cancer there.

After she passed away, Maddie learned sharing grief and speaking about her mother’s death helped her feel light. So, she has delivered speeches on behalf of The Stefanie Spielman Fund. Likewise, she helped fulfill her mom’s dream.

Madison Spielman’s mama had left a manuscript, which she had worked on while battling her cancer. The former later worked on the manuscript and published a book name Cancer Boo-Boo, which has worked as an inspiration to other families dealing with the problem.

To talk about her relationship status, Maddie is currently dating Matt Smith. She seems to be doing well in both her professional and personal life.

The second born among Chris Spielman’s kids is Noah. Like Madison, he also attended Upper Arlington High School. There he played football and was a three-year varsity starter. Then, he attended the University of Toledo for a year in 2015 before transferring to Wheaton College, where he continued his playing career.

Moreover, in September 2017, Chris Spielman’s son was among five football players from Wheaton College, who faced felony charges after being accused of a hazing incident. The incident took place in 2016 in which a freshman teammate was left half-naked with two torn shoulder muscles on a baseball field. He was restrained with duct tape and was beaten.

Following this, Noah was suspended. As of now, he is a singer and songwriter, and has posted several videos of cover songs on his Instagram account. Furthermore, he has been happily married to Lauren Martyn Spielman since July 2019.

Chris Spielman’s baby girl, Macy, was born Macy Lynn Spielman in Columbus, Ohio. Like her elder siblings, she also attended Upper Arlington, where she was named to the All-Ohio Second Team as a senior and had career totals of 1,622 points. After graduating, she went to Bowling Green State University (BGSU). There she played for coach Robyn Fralick.

So incredibly appreciative of the opportunity that Miami University and the coaching staff provided for me. By the grace of God I’m so excited to say that I’ve decided to continue playing basketball and attend Bowling Green, go falcons! 🙂 @BGSUwbb @CoachFralick pic.twitter.com/rN9TyKZs8z

Macy missed the 2019-20 season due to injury. Then, in the 2020-21 season, she played in 13 games. That season was pretty successful for her. Then, the following year, the basketball player transferred to Ashland University. She currently plays under the university women’s basketball head coach Kari Pickens.

Talking about her relationship, Macy has kept quiet. However, she is seen with a guy on her Instagram display picture. So, whether the boy is Macy Spielman’s boyfriend or just a friend remains a mystery.

Among Chris Spielman’s children, two have already completed college; one is in college. On the other hand, the youngest of the four, Audrey, has just finished high school. She attended Upper Arlington High School and graduated in 2021.

Talking about which college Chris’ youngest daughter is attending, it remains a mystery. However, in October 2021, The Ohio State University’s Instagram page shared her photo along with another girl. So, is it possible that Audrey has followed in her parents’ footsteps and is attending the university?

Nonetheless, Chris Spielman’s children seem to be doing well. In addition, their dad is happily married to Carrie Yocom Spielman, who also has two daughters, Kendra Yocom and Gina Marie Yocom. They all must share a good bond and must be enjoying family time a lot. We hope they continue making their parents proud. We wish the Spielman siblings blissful days ahead.

Normally used as a girl’s name, Madison can sometimes be a boy’s name. It has an English origin, and it means “son of Matthew.” Likewise, the name Noah is derived from the Hebrew word Noach, which means “rest or repose.”

The gender-neutral name Macy has a French origin, and it means “weapon or hill.” On the other hand, derived from the Celtic and Welch words, Lynn means “lake, waterfall, pool, and pond.” It can sometimes be used as a nickname for the Spanish name Linda, which means “pretty.”

Audrey is a well-known English name, which originated from the Anglo-Norman words for “strength and noble,” and its meaning is supernatural power and honorable.