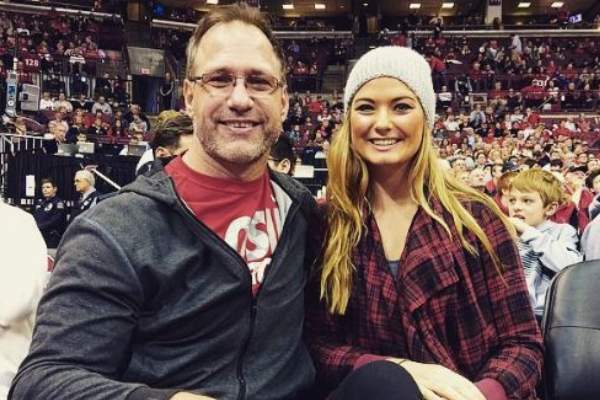 Chris Spielman is a renowned former football player from America. He currently works as a special assistant to the Detroit Lions CEO and owner. Born Charles Christopher Spielman, he played linebacker at Ohio State University, for Detroit Lions, Buffalo Bills, and Cleveland Browns. He also worked for ESPN and Fox Sports from 1999 to 2020.

Apart from being a successful personality in the sports world, Spielman is a proud father of four children. He shares the kids with his late wife Stefanie Spielman, who succumbed to breast cancer in 2009. They all have grown up and are doing well in their professional life. So, in today’s article, let’s know more about Chris Spielman’s daughter, Madison Spielman, and see what she is doing these days.

The Eldest Child Of Her Parents

As mentioned earlier, Madison is one of Chris’ children with Stefanie. She was born in 1994 as the eldest child of the couple. Upon her arrival, her parents must have been ecstatic. Then, Madison Spielman’s siblings, Noah Spielman, Audrey Spielman, and Macy Lynn Spielman, aka Macy Spielman, arrived. They all must have had a wonderful time growing up together.

Furthermore, Madison Spielman’s parents met at a teen dance club in Stark County in 1982. The high school sweethearts exchanged their wedding vows on June 24, 1989. Unfortunately, Mrs. Spielman passed away in November 2009 after a lengthy battle with cancer. Having survived four bouts, her mama could not survive the battle a fifth time.

Four years after her mom died, Madison Spielman’s father got married to Carrie Yocom Spielman. Her stepmother has two daughters, Gina Marie Yocom and Kendra Yocom, from her first marriage. They all must share a lovely bond.

Has Already Graduated From College

Chris Spielman’s daughter attended Upper Arlington High School. She was on the Varsity Basketball team and was also in Team Delta Max, a group for substance abuse prevention. She graduated in 2012 with a 3.8 GPA. Later, she enrolled at The Ohio State University and graduated in 2016.

While at college, Madison had a strong interest in broadcast journalism, mainly in sports. She briefly worked in the sports broadcasting sector and then transitioned to a career in marketing at The James Cancer Hospital and Solove Research Institute. She must be doing well in her professional venture.

Maddie Spielman has carried her mom’s name and message. When her mother passed away, she missed her and also struggled to figure out a life without her. She kept her emotions bottled up inside her, which later took a toll on her everyday life. Maddie once opened up and talked about her struggle with grieving, and afterward, she revealed she felt as if a big burden was lifted off her chest.

Since then, Ms. Spielman has started speaking at a number of events on behalf of The Stefanie Spielman Fund, established by her parents. She used to do commercials for Kroger and Donatos and even modeled for Capital Style two times.

Chris Spielman’s baby girl has followed in her late mom’s footsteps to assist those affected by cancer. She has delivered speeches to many fundraisers and organizations throughout Ohio. As mentioned earlier, she is currently involved in marketing at The James Cancer Hospital and Solove Research Institute.

Madison Published A Book Written By Her Mom

Besides following in her late mama’s footsteps, Chris Spielman’s daughter, Maddie, has also completed her work. When Madison Spielman’s mother was sick, she wrote a book so that it could inspire other families dealing with the same problem. The book is “Cancer Boo-Boo.” Many might wonder what was the reason behind the name.

Here’s the story behind how the name originated. In 1988, Maddie’s mom first learned about her cancer. Then, she sat down Maddie and her brother and said she had a boo-boo on her bosoms. For the next 11 years, her battle continued, and at the same time, she worked on a book, which came in handy as a form of information and encouragement to children whose moms get cancer.

During her final illness, Madison’s mama set the manuscript aside. It later ended up in possession of Bret Adams and Rick Bauer, which was passed along other records of Strong Heart, a non-profit created by Stefanie. Years later, when Adam and Bauer started working with her father, they talked about the manuscript, which Bauer had kept as a backup copy on his computer.

After Madison learned about it, she wanted to fulfill her mom’s dream. So, in collaboration with her aunt, Sue Fitz, and her friend, Nancy Rapport, she made certain changes to the story, and Telemachus Press published it.

In the words of her mother… @maddie_spielman shares a new Children’s book on how to talk to your kids about cancer. Her mother wrote it before she passed away… and she fulling her mothers dream, got it published @SusanGKomen @OSUWexMed pic.twitter.com/r77R0pCrTb

Furthermore, the art for the picture book was done by Donna Stackhouse, and they were all based on her family photos. The book is now available on Amazon for $14.99 in paperback. Though her mom is no more, she will always be alive through her book.

Chris Spielman’s baby girl is currently dating Matt Smith. It is not known when the couple started dating, but her one Instagram post said he was her favorite gift of 2018. So, is it possible the duo met in 2018 and started their relationship then?

Nonetheless, Madison does not hold back from sharing lovely pictures with her beau. Hopefully, their relationship lasts long, and we get to hear some good news soon.

Nevertheless, Chris Spielman’s little girl seems to be doing well. Hopefully, she continues doing good deeds and make her parents proud. We wish her abundant success and happiness in the future.

The name Madison could be both girl’s or a boy’s name, and it means son of Matthew. On the other hand, the girl’s name Maddie has a Hebrew origin which translates to maiden, woman from Magdala, and unmarried woman.