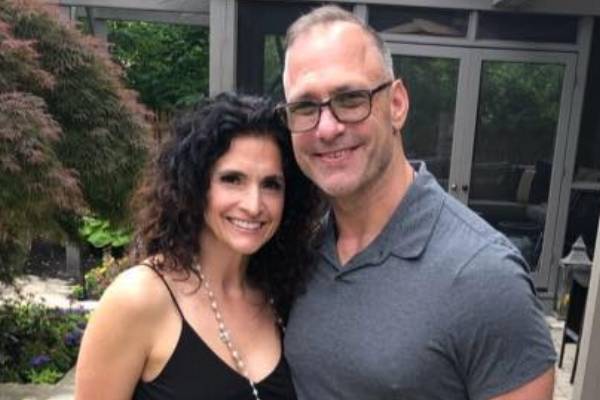 Chris Spielman, born Charles Christopher Spielman, is a special assistant to the CEO and owner of the Detroit Lions of the National Football League. Spielman, who played linebacker at Ohio State University, was a three-time All-Pro while he played for the Lions. Likewise, from 1999 to 2020, he worked as a broadcaster for ESPN and Fox Sports.

Apart from a successful career, Mr. Spielman leads a blissful family with his partner, Carrie Yocom Spielman. Did you know she is his second spouse? Well, there are other interesting facts about Mrs. Spielman. So, in today’s article, let’s know in detail about Chris Spielman’s wife.

As mentioned earlier, Carrie Yocom Spielman is the former football player, Chris Spielman’s spouse. The couple met in 2011 and started their romantic relationship. Then, on July 5, 2013, the lovebirds walked down the aisle.

It is not the first marriage for the pair. Carrie Yocom‘s husband was previously married to Stefanie Spielman. Unfortunately, she succumbed after her breast cancer occurred for the fifth time in November 2009. In 1998, she was three months pregnant when she discovered a lump in her breast.

Likewise, Carrie was also previously married to Gordon Yocom. However, it is not known why their marriage ended. Having found each other in the later part of life, Carrie and Chris are thankful for one another and love each other immensely. The duo does not hold back from sharing adorable pictures, which shows their relationship’s strength.

A Blended Family Of Eight

Since 2013, Carrie and Chris have been enjoying their marital bliss. Before marrying her current husband, Mrs. Spielman was a single mom of two children, Gina Marie Yocom and Kendra Yocom. She shared the kids with her former husband.

After Carrie got married to Chris, she went from being a proud mother of two to a doting stepmother of four children. Her husband shared Noah Spielman, Audrey Spielman, Madison Spielman, and Macy Spielman with his late spouse.

Many might think it must have been difficult for Carrie to adjust to such a big family. But, since she came from a family of eight herself, it was easy for her. Chris Spielman’s wife took a break from her job to focus on the family. She loves and enjoys the controlled chaos of such a big family.

Was Born In Ohio

Chris’ other half was born and raised in Youngstown, Ohio. Talking about her age, her birthdate has not been revealed yet. However, she often thanks everyone for their birthday wishes in January. Moreover, Carrie has not revealed much about her parents and siblings. But she came from a family of eight and once posted a picture with her mom and sisters.

In addition, Carrie moved to Columbus from Youngstown in 1990. She attended The Ohio State University, from where she graduated in 1993. On the other hand, which high school she attended remains a mystery.

Chris Spielman’s Wife Is A Realtor

Carrie’s hubby has been making a great name in the sports industry. But, unlike him, she has been working in a completely different field. After graduating from Ohio State, she worked at Bath & Body Works as an Operations Planner in Columbus, Ohio. Then, she worked at Cardinal Health as a Strategic Investment Analyst in Dublin, Ohio.

Chris Spielman’s wife is mainly known for her real estate career. After marrying him, she decided to take a break from it so that she could assist him in business and also focus on the needs of her new family. In November 2019, she resumed her career in real estate. Currently, Mrs. Spielman works at Street Sotheby’s International Realty. She has sold seven out of eight houses that she has bought.

Besides being a real estate agent, Carrie also worked as a personal trainer for 25 years. Having had a passion for fitness, she was also a fitness and multi-sport competitor. Like her husband, she is also a philanthropist. Carrie gives her never-ending support to the Stefanie Spielman Fund through event hosting and fundraising. She also volunteers at Children’s Hospital and mentors homeless youth in Columbus.

An avid follower of Christianity, Carrie seems to be doing well in her life. She seems to have gracefully balanced her work life and mom life. We hope the pair’s marriage lasts a lifetime and they continue living a blissful life together. Hopefully, Carrie has a sound health and glorious days ahead.