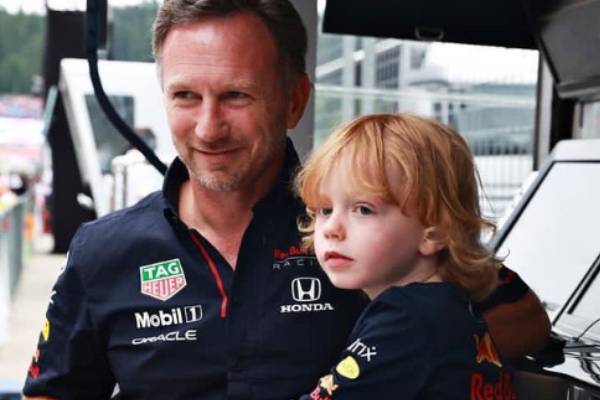 Racing enthusiasts might have come across Christian Edward Johnston Horner, the Team Principal of the Red Bull Racing Formula One team. Having worked in the Formula One racing scene for several years, Christian Horner is a well-known name in the sports industry. Additionally, the F1 Team Principle is famous for his beef with the Mercedes’ Team principal and former racing driver, Toto Wolff.

Christian has amassed a sizable fan following because of his professional career. Owing to his popularity, his personal life is often discussed in the press. So, it is a well-known fact that Horner is the father of a son and a daughter. Despite this, there isn’t much information about his children available online.

So, in this article, let’s discover more about Christian Horner’s son, Montague George Hector Horner with his wife, Geri Halliwell. Furthermore, let’s also look at how the celebrity kid is growing up.

Geri and Christian’s Only Son

Geri Halliwell announced her pregnancy with her husband, Christian Horner, on October 16, 2016. The couple then welcomed their son, Montague George Hector Horner, on January 21, 2017.

Since his birth, Geri’s Instagram has been swamped with adorable images of the kid. Looking at the photos, it is apparent that the famous youngster appears to be growing up with the greatest love and care. Likewise, as the youngest child in the family, Montague Horner‘s parents must pamper him a lot.

Furthermore, while Geri and Christian Horner’s son does not have any siblings of his own, he does have two half-siblings, Bluebell Madonna Halliwell and Olivia Horner. Montague and his half-sisters are incredibly close and spend a lot of time together.

Additionally, Christian has shared a handful of pictures with his son on automobiles in which it appears that the Team Principle is teaching his son how to drive. Furthermore, his son appears to be interested in racing and is present at some of his races.

As a result, Christian Horner’s son could follow in his footsteps. However, it is still too early to tell whether Montague has inherited his father’s talent.

So, for the time being, let us send our best wishes to the Horner family and hope to see more of them as the years progress.

Both Of Montague’s Parents Were Previously Married

At first glance, Geri Halliwell and Christian Horner appear to be the perfect couple, their names etched in the stars. However, this was not their first marriage.

The media publicized Halliwell’s relationship with screenwriter Sacha Gervasi as they are well-known celebrities. While when the two started dating is not known, they did welcome a daughter Bluebell Madonna Halliwell in May 2006. Unfortunately, Sacha and Geri’s relationship began to crumble, and the two separated.

Similarly, in their 14 years of togetherness, Christian and his former partner, Beverley Allen welcomed a daughter Olivia in October 2013. However, after spending decades together, the couple decided to call it quits in 2014.

The reason for their split is uncertain, and neither ex-partners have spoken about it. However, as Christian started dating former Spice Girl Geri Halliwell just a few months after his split, numerous sources painted Geri as the villain who ruined Christian’s previous relationship.

Likewise, Montague’s grandparents, Garry Horner and Sara Horner disapproved of his parents’ relationship. Moreover, they were devastated when the couple announced their engagement on November 11, 2014. Still, the pair married on May 15, 2015, in Woburn, Bedfordshire.

They are now living a blissful marital life with their children. So, let us hope that their happiness only increases with time.

Celebrity children are infamous for their luxurious lifestyles. So it’s no surprise that the children of superstars live a lavish lifestyle as their parents can afford almost anything. Likewise, these celebrity parents do their best to provide a comfortable life to their children.

With Christian Horner’s net worth being in the millions, it is no surprise that his children have access to the finer things in life. Looking at Halliwell’s Instagram, it is evident that Horner’s son is having the time of his life visiting different destinations and going on helicopter rides and cruise trips.

The Horner family is currently alternating between their residences in Oxfordshire and Hertfordshire. So, let us all wish Christian Horner’s son well and hope that his future is bright.