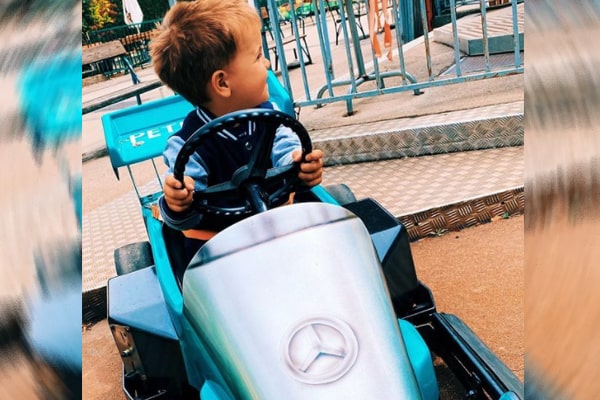 Torger Christian Wolff, aka Toto Wolff, is an Austrian investor and former racing driver who holds a 33% stake in Mercedes and is the Team Principal and its CEO.

Besides having a thriving career in Formula One since 1994 and continuing to contribute to the racing world accordingly he is equally accomplished when it comes to his marital life with fellow racer Susie Wolff. The couple welcomed a son named Jack Wolff in 2017 and are enjoying a new experience of parenthood.

Born to Toto Wolff and Susie Wolff In 2017

Aforementioned, Toro Wolff’s son, Jack Wolff, was born to the racing couple, Toto and Susie who exchanged vows in 2011. Since then, the talented Wolff pair went through several milestones with a positive outlook and built a happy family.

Well, Toto Wolff welcomed his first child with Susie, Jack Wolff, on April 10, 2017, at a hospital in Zurich, Switzerland. Moreover, Wolff’s wife, Susie, announced the arrival of new life via Twitter, sharing a beautiful picture of Toto and his baby boy.

Furthermore, Susie captioned, “Yesterday Toto & I welcomed a healthy Baby Wolff to the world.” She further continued, “could burst with happiness & love!” concluding the warm caption with a blue heart.

Following the pregnancy, Toto Wolff’s wife, Susie, retired momentarily to embrace motherhood, but the ‘adrenaline junkie’ could not resist race cars’ temptation. Thus, she started her work as her parents came to the rescue.

As per Toto Wolff’s concern regarding his child’s rearing, he is more of a secured and private sort of parent. He rarely shares anything confidential on his social media, but thanks to Susie Wolff’s intervene, we get to see Jack Wolff’s bubbly childhood.

Aforementioned, Jack Wolff’s parents, especially his father, are very private about his life, but his mother, Susie, gives a little insight into his life.

Well, it looks like Jack inherited his parents’ interests in cars and thus became a car enthusiast at a very young age.

Furthermore, Susie also shares a few pictures of him on his miniature ride. She also uploaded a video of him coloring Benz on his iPad, basically snitching on dad at the moment.

Besides race cars, Toto and Susie Wolff’s son, Jack Wolff, is a skiing fan. Susie recently uploaded a video of her son skiing with her behind and captioned, “Go. Fast. Jack’s two new favorite words.” Can the Wolff family be any cuter, you may ask, YES! They can.

Along with his parents, Jack enjoys a very lavish yet grounded lifestyle surrounded by cars and car fanatics. Therefore, it wouldn’t be a surprise if Jack chooses to follow in his parents’ footsteps. However, his father seems a little skeptical regarding his career in the racing world.

While talking in a podcast, Toto revealed that he hopes his son is into tennis or soccer or anything he enjoys watching rather than panicking in the pits or the Grandstand. He further added that Formula 1 is too dangerous. But it’s up to Jack to choose, and if he opts F1 over anything, Toto would probably be more than supportive.

Moreover, Toto is a phenomenal father, but did you know Jack isn’t his first gateway to fatherhood?

As mentioned earlier, Toto Wolff”s son is enjoying a great life surrounded by cars and car-lovers. But he also shares his childhood with his half-siblings, Benedict and Rosa Wolff.

Unlike Jack, his half-siblings stay away from the media scrutiny, and their father, Toto, would barely talk about them during interviews.

However, Jack Wolff’s father did mention that Benedict Wolff was aspiring to become a doctor. Moreover, he was utterly *shooketh* when he found out his oldest kid was the communications manager for an F1 school team.

Unfortunately, we do not have faces of Jack Wolff’s older half-siblings, but they must be as cute as he is. Also, Susie once shared a picture of Toto, Benedict, and Jack captioning, “Wolff boys.”

Thus, it wouldn’t be wrong to point out that the Wolff family has a close relationship with one another, and Jack enjoys the intimacy and love he receives from everyone. We shall probably see him in the racing tracks in the coming days seeing his sports car’s inclination.

Whether it is engineering the machine or riding the beast, we will have to wait to see his choices. But do comment what you gamble on for Toto Wolff’s son, Jack Wolff’s career.

The name Jack means God is Gracious and has an English origin.