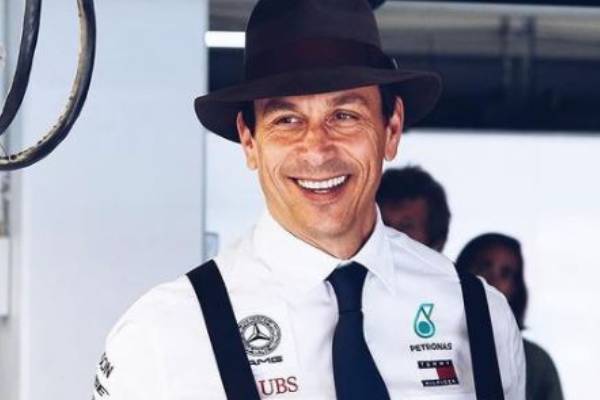 Torger Christian Wolff, popularly known as Toto Wolff, is an investor, motorsport executive, and former racing driver. He currently serves as the Team Principal for the Mercedes AMG Petronas F1 Team. Not only that, but he is also the CEO of the team. Toto, who started his motorsport career in the Austrian Formula Ford Championship, has gained significant fame and success in his professional career.

While many people are familiar with Toto’s professional career, his personal life has always remained secret as he has not revealed much about it. Nonetheless, we know that he is the loving husband of Susie Wolff, and a doting dad of three kids, a daughter and two sons.

Thus, in this article, let’s learn in detail about Toto Wolff’s son, Benedict Wolff, and his whereabouts.

Toto Wolff’s Son With His Ex-Wife

Not many know, but the Team Principal for the Mercedes AMG Petronas F1 Team has been married twice in his life. Toto Wolff’s first wife is a woman named Stephanie, with whom he was reportedly together for ten years. And in their decade-long togetherness, the former pair welcomed two kids, a son, and a daughter.

Toto Wolff’s son with his ex-wife, Stephanie, is Benedict Wolff, born in 2002. Benedict’s sister is Rosa Wolff, whom his parents welcomed in 2004. However, his mom and dad seem to have made a pact of secrecy as they have not revealed anything about the Wolff siblings. Similarly, Benedict’s mother has also chosen to live away from media scrutiny.

Was The Communications Manager For A F1 Schools Team

Toto Wolff has always refrained from sharing his personal life in the media. Seeing his dad maintain a private lifestyle even after being a famous personality in the Formula One world, Benedict seems to have developed the same habit. As a result, he does not have any accounts on Instagram or Facebook, not that we know of anyway. Moreover, what Benedict looks like is also a big mystery.

But in an interview with UBS, Toto revealed that as a 16-year-old, Benedict wanted to be a doctor. But later, the Mercedes Team Principal found out that his son was the communications manager for a Formula One school’s team. Toto Wolff’s son’s team races 30 cm long cars with gas jets and was qualified for the World Finals in Austin, Texas.

Toto was surprised after he learned about this as his son had decided not to tell him, thinking it was nothing to do with him. Similarly, Benedict did not share the news with his dad after his team qualified for the World Championship finals for the second time.

It is unclear if Toto’s eldest child still dreams of becoming a doctor or has followed in the former racing driver’s footsteps. But, no matter what he ends up pursuing, Benedict’s dad will undoubtedly support him.

Benedict’s Dad Got Married For The Second Time

After being together for ten years, Benedict Wolff’s dad and mom ended their relationship. But they did not reveal anything related to their divorce and settlement. Following the separation, Benedict’s dad met Susie Wolff. It is reported that the duo crossed each other’s paths in 2006 on a racing track.

In October 2011, Susie and Toto walked down the aisle. Their wedding ceremony was intimate, and only their close friends and families attended their marriage. Other than that, details about the relationship between Benedict’s dad and his stepmom have not been revealed yet.

Benedict Wolff’s father, Toto, and Susie must have bonded over their shared interest for racing. Similarly, Toto Wolff’s son, Benedict, also seems to have a good relationship with his wife. Moreover, Susie also shares pictures of the young one on her Instagram.

Benedict Wolff is the only son of Toto and his ex-wife, Stephanie. But he is not the only son of his dad, as Toto has welcomed a boy with his second wife, Susie Wolff. On April 10, 2017, Benedict Wolff’s stepmother gave birth to his half-brother, Jack Wolff, at a hospital in Zurich, Switzerland. His stepmom shared the news via Twitter with an adorable picture of his dad and his newborn half-sibling.

Benedict shares a close bond with his half-brother, and they spend most of the holidays together. In an interview with F1, Toto stated that the kids spend Christmas and holidays together. Similarly, his mom and stepmom have also maintained a good relationship.

Although much about Benedict and his sister is unknown, they must be in good health. He must be living a good life away from the media scrutiny. Let’s hope to hear more about Toto Wolff’s baby boy in the future.

The name Benedict means Blessed and has a Latin origin.