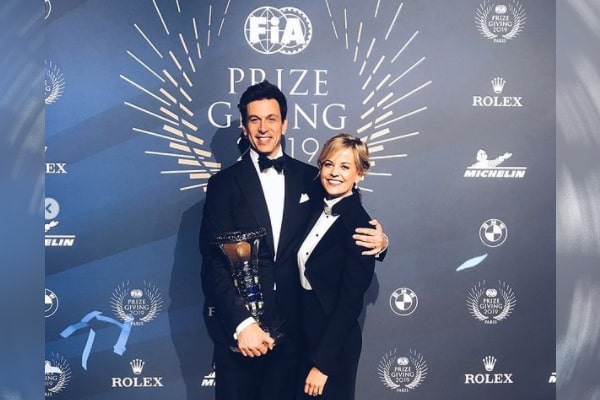 Toto Wolff and Susie Wolff are one of the most sought-after couples in the racing world. The combination of former racing drivers is beyond *perfecto*, and their relationship is wondrously beautiful.

Thanks to Susie’s contract with Mercedes, the Wolff couple met, and the rest is the history. As of now, they have already welcomed a baby boy and are leading a joyful life. But let’s get into more details about the former racing drivers, Toto Wolff and Susie Wolff’s relationship chronicles.

As mentioned earlier, the former racing pair are the kind that screams, “meant to be.”

The pair reportedly met on a racing track in 2006. According to the Gentle Woman, Susie was nominated for Britain’s Young Driver of the Year Award twice. Thus, in 2006, Mercedes noticed the ambitious rider and offered her a year’s contract that soon became seven.

It was reportedly the time when Susie and Toto Wolff’s path crossed. Well, there isn’t much detail about the couple’s relationship details, but Toto was soon impressed by his then-to-be wife’s fueling ambition.

During an interview, Toto Wolff’s wife revealed that Mercedes had knocked on her doors when she struggled to pay rent. Thus, the life-turning contract also landed her in an excellent relationship in Hockenheim at the Achat hotel.

Aforementioned, Toto Wolff and Susie Wolff were inseparable since their first date at Achat Hotel. Their relationship eventually made them walk down the aisle in October 2011. Unfortunately, fame makes people nuts, and their privacy becomes scarce. However, the Wolff couple managed to keep things to themselves and decided to keep their special wedding as a simple affair.

Wolff’s wedding ceremony must have been posh yet intimate. Although we did not witness them exchange vows, we see them working hard to maintain their relationship work.

Today, even after a decade of marriage, the Wolff couple still share the same passion and love for one another. Moreover, Susie Wolff’s husband, Toto, proudly talks about her achievements.

While talking to British Vogue in 2014, Susie revealed that her husband would come disappointed when nobody believed him saying, “I have a wife racing.” Thus, Frank Williams, the founder of team Williams, visited the track to watch her and later complimented her.

Susie also talked about how people believe that she got in the ream because of her husband. However, they were all professionals in decision-making and admitted that she was often treated as a trophy driver. Toto looks over Formula One while his spouse, Susie, is a team principal at Formula E.

Moreover, Toto Wolff’s wife previously mentioned that she wouldn’t be racing after starting a family. And she kept her words, well mostly.

Toto and Susie Wolff welcomed their first child, Jack Wolff, on April 10, 2017, at a hospital in Zurich, Switzerland.

Susie announced the news via Twitter and added that the pair would burst with happiness & love and concluded the post with a blue heart and an adorable picture of Toto and the newborn.

As of now, Toto and Susie Wolff’s baby boy, Jack, is growing up into a fine young child. Since he is raised by one of the greatest car enthusiasts, it wouldn’t be a surprise to see Jack rocking the racing world at a very young age.

Well, Susie often posts about her kid and her husband on her Instagram along with her professional achievements. Moreover, she also retired to embrace motherhood fully. However, the ambitious woman could not resist the racing cars, and the adrenaline junkie ended up working again.

Therefore, Toto and Susie never forget to thank their parents for helping raise their kids. The Wolff pair is technically the parents of three kids, as Toto has two kids from his previous marriage, Benedict Wolff and Rosa Wolff.

Susie Wolff’s husband Toto is comparatively secretive about his children and hence refrains from posting pictures of them on his social media handles. He also barely talks about them during interviews. Nevertheless, Toto and Susie are raising their kids to be humble human beings, and we might as well see them in the racing tack in the future.

In the male-dominated world, a woman’s success is always credited to her husband as people deny acknowledging women’s hard work.

Well, a similar case occurred with the former race driver couple, Toto and Susie Wolff. Toto frankly said that he thinks their relationship affected Susie’s career rather than helping the Williams Formula One test driver’s career.

Susie’s beau further pointed out that she was already a big name before she was at Mercedes & in the DTM. Since it is often suggested that her marriage fueled her entrance into F1, it seemed essential for Toto to clarify the air.

The 33% stakeholder at Mercedes, Toto, also said that it was fundamentally unfair to describe Susie as Toto Wolff’s wife. He praised his partner’s hard works and emphasized the sacrifices she had to make because of him.

Well, haters will always find one way or the other, but Toto and Susie are completely crushing their career’s challenges together and are hitting the milestones together. Their relationship also seemed to have deepened lately, thanks to the pandemic.

Toto Wolff and Susie Wolff’s Relationship During & After Covid

The global pandemic has significantly affected relationships and perception towards relationships. However, it seems to have strengthened Toto and Susie Wolff’s marriage.

While talking in an interview amidst COVID, the Wolff couple admitted that the pair spent a lot of time together but barely got time to spend with their babies.

Susie distinguished that she and Toto always had a tight schedule, but during covid, they’d walk together. She further added that her husband runs errands which allowed her to appreciate the small things in life. She also said that the pandemic reminded the couple how important it is to spend quality time as a family.

Moreover, Toto also added that the couple spent five months together, and the time they spent together only made their relationship more potent than ever.

Well, the bottom line is Toto Wolff, and Susie Wolff are one strong couple who can manage to go through every hardship together. Hence, we will probably hear the Wolff couple make comments about their time in F1/FE.