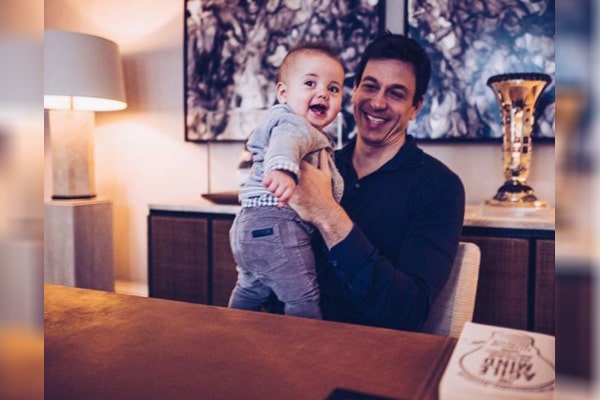 Toto Wolff is a former racing driver and Austrian investor who holds a 30% share in Mercedes AMG Petronas Motorsport Formula One Teams. He began his motorsport career in the German Formula Ford Series and the Austrian Formula Ford Championship. His racing career was short but went on to make remarkable contributions as an investor.

Plus, he is married to Susie Wolff aka Suzanne Wolff, the first woman to race in the F1 race over a few decades. The pair shares impeccable chemistry both professionally and personally. The exceptionally talented couple hit several milestones together and are building a happy family, all while maintaining their professional career. Hence, we are about to talk about the magical couple and their kid from now on.

Toto Wolff is a very private person, so much so, he is not present on any form of social media. But, thankfully, his partner seems to differ from his value. She shares bits of their life as a family with fans.

The pair welcomed their first child, Jack Wolff on April 10, 2017, at a hospital in Zurich, Switzerland. Toto Wolff’s wife, Susie, announced the birth of baby Wolff via Twitter with a beautiful photo of her child and father. She mentioned how happy she was and would burst with happiness and love.

Both Toto and Susie are incredibly busy people and very career-oriented. However, Susie retired in quest of embracing motherhood and spending time with her baby. However, the ‘adrenaline junkie’ couldn’t stop herself from working again and hence started her work when her parents came to the rescue.

Would it be surprising to hear Jack Wolff, Toto Wolff’s son, is fascinated by cars? Not at all! Hence, this is no significant news, but Jack Wolff is already a car enthusiast.

Aforementioned, Toto is a private person and stays away from the glitz, glamour, and even social media. However, Mrs. Wolff comes to intervene as she posts every little moment she gets to spend with her little one. Moreover, going through her Instagram or Facebook profile, baby Wolff has his favorite model and brilliant color choices.

Besides being mama’s little boy, Toto Wolff’s son is equally adored by his grandparents. Additionally, Jack Wolff’s parents involve him in a few Kart games and take him on a ride sometimes.

Hence, little Wolff might grow up to build a career that roars louder than his parents’. Come to think of it, Toto Wolff’s child might inherit different sets of skills from his parents. Well, let’s wait and see what Jack would choose to become.

Moreover, Toto’s professional rival, Christian Horner‘s children are also regular at the races. So, if both of the F1 team principals’ kids choose racing as their career, we might see the continuation of the Wolff-Horner rivalry on the track in the future.

By nature, investor, and former racer, Toto is a reserved person. But the guy is successful business personnel and a father of three children altogether. Before welcoming Jack, he became the father of two young kids with his ex-wife, Stephanie.

The former couple was married for ten years before parting ways. Unfortunately, it looks like the pair made a pact of secrecy before parting ways, which is why not much is known about their son, Benedict Wolff, and daughter, Rosa Wolff.

However, a father would ‘NOT’ talk about his kid when asked about it. In an interview, he revealed that his son, Benedict, wants to be a doctor. However, he was utterly shocked when he found out Benedict was the communications manager for an F1 school team, and his team had qualified for the World Finals in Texas.

Toto Wolff’s son, Benedict Wolff’s team, qualified the following year again. Interestingly, he found out about it via an Austrian newspaper. No matter what his son would choose to pursue, Toto would probably support him wholeheartedly.

Unfortunately, there is not much about Toto Wolff’s daughter, Rosa Wolff. But, she must be in good health. Let’s hope to hear more about Toto’s children in the future.

The name Jack has English origin which means God Is Gracious. Similarly, Benedict means blessed and has Latin origin while Rosa means rose and originated from Latin.