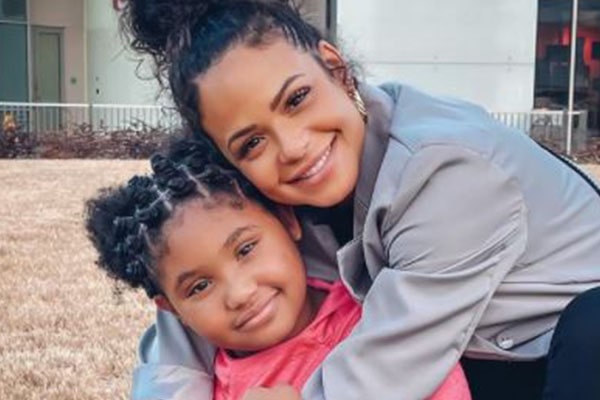 Christina Milian's daughter is about to be a teenager. Image Source: Violet Madison Nash Insttagram.

Christine Marie Flores, aka Christina Milian, is a well-known actress, singer, and songwriter from America. She is mainly known for her albums, which were top hits. Apart from the hit albums, she has acted in various movies and series, which were critically acclaimed. Christina has accumulated enormous fame and wealth from various ventures that she has been involved in.

Christina is one of the most talented personalities in Hollywood who is widely known for her music career. Apart from that, she is also a family person who loves to enjoy time with her family. She is currently enjoying a blissful marital life with the famous French singer, Matthieu Tota aka M. Pokora. The duo has a son, Isaiah Tota, together and are expecting another baby. Before tying the knot with Pokora, Christina was married to musician The-Dream and had a daughter, Violet Madison Nash, with him.

Is The Only Child Of Christina Milian With The-Dream

As stated earlier, Christina Milian shares a blissful marital life with M.Pokora. Before exchanging the vows with him, she was married to musician The-Dream for less than a year in 2009. The ex-pair separated in late 2009, and their divorce was finalized in October 2011.

Christina gave birth to her daughter, Violet Madison Nash, in February 2010, with her ex-husband The-Dream. Christina and her former partner decided to co-parent their kid after their divorce. They are in great teams and raise their baby girl together.

The popularity of the beautiful singer Christina Milian is not surprising. People admire her music, acting skills, and looks. She makes several public appearances at various functions, ceremonies, and award functions.

Furthermore, Christina is often accompanied by her beautiful daughter in those events. In May 2019, she attended the Aladdin premiere in LA with her daughter. Besides this, Violet also attends other functions with her mother.

As we all know, Christina Milian is a famous personality. She has gained popularity as a singer and an actress. Apart from that, she also owns a YouTube channel with 39.4K subscribers. Christina Milian’s daughter also appears on the videos with her. The mother-daughter duo uploads various fun content on the channel.

The parent-kid duo seems to be having fun, and they love each other and consider themselves besties.

Is A Great Sister

Christina Milian’s daughter Violet is her only kid with The-Dream. However, Violet has eight half-siblings from her father’s side and one half-sibling from her mother’s side. Violet resides with her mother and her partner, M.Pokora, and half-brother Isaiah.

In an interview with US Magazine, Christina mentioned that her daughter is super helpful. She also said that Violet helps feed her brother, Isaiah, and even watches him when they are busy.

Is Active On Social Media

Also Spends Time With Her Dad

Violet Madison-Nash’s mother, Christina Milian, was married to the musician, The-Dream. They were married for a brief period of time. After their divorce, Christina took the primary custody of Violet. Nevertheless, Violet also spends time with her dad. After the birth of her half-brother, she was seen spending chill time with her dad, The-Dream. The father-daughter relation is strong, and the parents are also on good terms with each other.

Violet has already become famous as the daughter of Christina. Inspired by her parents, she might also become a successful musician like them. Christina Milian and her daughter, Violet, live a happy and comfortable life. Furthermore, Christina is set to welcome her second child with her husband, M.Pokora, and Violet is very excited to a big sister again. Let’s hope we get to meet the new member of the Milian-Pokora family soon.

The name Violet has a French origin, which means a musical instrument. The name also has an English origin which means purple/blue flower.