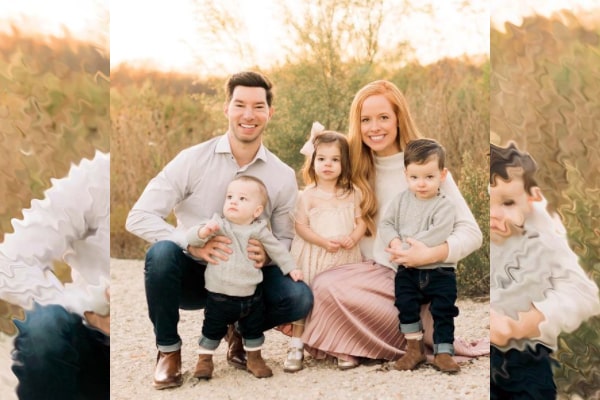 Cory Cotton is one of the co-founders of one of the ginormously popular YouTube channels, Dude Perfect. He came together with his twin brother, Coby Cotton, Cody Jones, Tyler Toney, and Garrett Hilbert, to form the group.

Cory Cotton is enjoying a successful career in YouTube and started his journey as a father recently with his wife, Amy Cotton. The couple exchanged vows in 2016 and welcomed three kids thereafter.

Aforementioned, Cory Cotton’s blessings are not just limited within his business but also his marital life. The Cotton couple multiplied their boon as they held his first kids together with his partner of several years, Amy Cotton.

The Cotton couple exchanged vows in 2016 after a year of dating. Furthermore, Cory claims that proposing to his wife was the best thing that has ever happened to him. Well, better things happened when he announced their pregnancy via Instagram in July 2018.

Cory seemed pretty excited about welcoming their children. Thus, he wrote, “Amy and I are having TWINS!” Cotton continued, ‘We seriously couldn’t be more excited. God is good.” Furthermore, Cory Cotton’s wife, Amy, shared the same sentiment via her Instagram.

Moreover, Amy Cotton documented a few more pregnancy pictures on her Instagram before announcing the arrival of the fraternal twins, Crew, and Collins on November 30, 2018.

Likewise, Cory also shared his excitement via Instagram and reassured that everyone was happy and healthy.

As mentioned earlier, Cory and Amy Cotton welcomed twins on November 30, 2018. Although Dude Perfect’s Cory assured everyone was healthy, their son, Crew, had to be hospitalized one day after leaving the delivery hospital.

The new mother, Amy, talked about the scary 48 hours their son had to spend at the NICU in one of her Instagram posts. Moreover, she thanked God for keeping her son healthy and trusting them with these previous lives.

Amy further pointed out that Crew put his new parents on a significant emotional coaster and was honest about scary parenthood. She concluded the long caption by telling her son that his parents love him.

As of now, Cory Cotton’s children are growing up with immense love from their parents. Cory seems to enjoy fatherhood immensely and frequently uploads pictures of his babies on his Instagram.

Furthermore, Cory tripled his happiness as he welcomed a son in 2020.

Amidst the pandemic chaos in 2020, Cory welcomed a new life yet again. He held his third child, a son, Charlie Cash Cotton, on March 3, 2020.

Amy and Cory announced the arrival of their son via their social media individually. While Cory thanked god for another precious kid and praised his wife for being ‘an absolute champion,’ Amy revealed that Charlie’s birth was such a dream.

Both Cory and Amy are so much in love with their kids and frequently post about Charlie’s growth.

Well, time flies and Cory Cotton’s children are already 2 and 1. All of the Cotton kids, Collins, Crew, and Charlie, are growing up in a happy environment in two humble parents’ protective arms. Therefore, let’s hope to hear more of them in the coming days.

The name Crew has a Latin origin which means Chariot. Similarly, Collins means people of victory and has a Greek origin. Likewise, Charlie has Old German origin, which means ‘free man.’