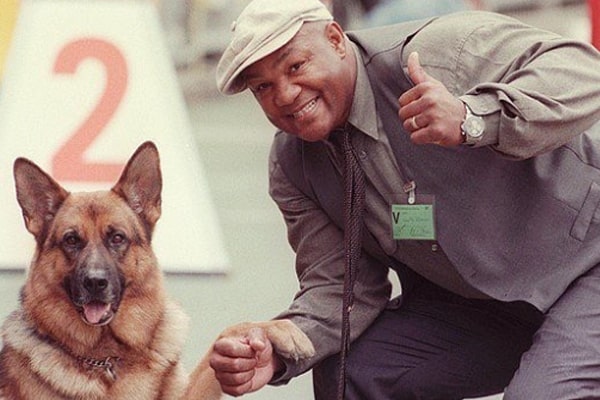 George Foreman is a remarkable name in the combat sport, boxing world. Known as ‘Big George,’ he is a two-time world heavyweight champion and an Olympic gold medalist.

The author and entrepreneur, George Foreman, retired in 1977 after a loss to Jimmy Young but managed to keep his name in the history as ‘Big George.’  Furthermore, besides having a glorious past as a boxer, George Foreman is also a doting father of twelve children. Among them, we are going to discuss Foreman’s daughter, Courtney Isaac Foreman.

Aforementioned, the Olympic gold medalist, George Foreman, is a father of twelve children. He had his first ten children with his wives while adopted two daughters in 2009 and 2012, respectively.

Among the adopted daughters is Courtney Isaac Foreman. George adopted her in 2012. There isn’t much on Courtney’s adoption and her whereabouts, but one thing about George is that he grew up in a poor neighborhood. Thus, he keeps spreading love and kindness.

Regrettably, George Foreman’s daughter, Courtney Isaac Foreman, chose privacy and is living a secluded life away from the public scrutiny. Despite the lack of resources, the family seems to be the center of George’s universe and hence developed a good bond with his adopted daughter.

Additionally, Courtney was not the only adopted child in the family; her sister, Isabella Brandie Lilja, was also taken in 2009. Although Courtney is not available in any form of social media, let’s hope she’s doing well and getting along with her siblings.

Courtney’s Older Brothers Are Named After Her Father

It must have been fun living with six Georges, but according to George III, they all had nicknames. He further said that there’s only one person who responds to the name George, and that’s their dad, the ‘Big George.’ George III was nicknamed Monk, while others were named Big Wheel, Red, and Little Joey, respectively.

It looks like George had a high intention behind naming his sons George. According to Foreman’s official website, he explained that he called his sons Gorge Edward Foreman so they would have something in common. He added if one of them goes up, then all go up together, and if one falls, everyone goes down along.

If you think of it, isn’t it the best way to keep ones’ sons on track? Anywhoo, Courtney Foreman’s brother, George III, pursued a career in boxing and entrepreneurship. Similarly, George IV appeared on the second season of the reality tv series, American Grit.

One Of Courtney Isaac’s Sister Died Of Suicide

Courtney Isaac Foreman’s father, George Foreman, has a triumphant career as a boxer. But he couldn’t handle all the relationships he was once involved in. As a result, he got married four times before he finally settled with his third marriage.

Courtney’s father welcomed a daughter Michi Foreman with his ex-wife, Adrienne Calhoun, while second and third marriage to Cynthia Lewis and Sharon Goodson was very brief.

Similarly, Foreman’s siblings, George III and Freeda Foreman, were born to Big George and Andrea Skeete. Unfortunately, Freeda passed away on March 9, 2019, in  Houston, Texas, in an apparent suicide. She was only 42.

Courtney Foreman’s late sister Freeda pursued her dream of being a pro wrestler in 2000 and retired the subsequent year with a record of 5-1. She retired, aiming to become a boxing promoter and to raise a family. Sadly, her body was found in her Houston home with no suspicion of foul play.

Foreman’s children are all living a private life, and Courtney is no exception. But it looks like privacy is crucial for her to maintain a peaceful lifestyle. Let’s hope we get to peek in her life soon.

The name Courtney is of French origin, which means ‘from the court.’ Similarly, Isaac means ‘one who laughs’ and has Hebrew origin.