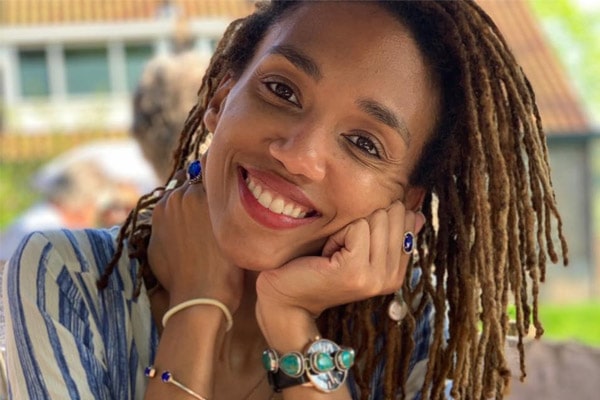 Leola Foreman is one of the five daughters of George Foreman. Image Source: Leola Mariah's Facebook.

The legendary boxing champion George Foreman is the winner of seventy-six bouts. He claimed the heavyweight title on two separate occasions during his career as a professional boxer. Along with the walk of life in the boxing ring, George became a pop-cultural presence selling his famous Grill.

George Foreman’s endeavors, however, are not limited to fighting, being an entrepreneur, and filming commercials. The former ordained Christian minister is the father to ten children with an additional two adopted daughters.

Among the seven daughters, Leola Foreman is one of George Foreman’s daughters with his current wife, Mary Joan Martelly. Here, in this article, meet the beautiful Leola Foreman and get a closer look at her professional and personal life.

Leola Is A Conservative Feminist Comedienne

The graduate of Texas Southern University, Leola Foreman, is self-employed. She is a conservative feminist comedian. Leola often gives guest appearances in various TV programs and radio podcasts as a female comedian.

Besides, Leola Foreman is a YouTuber. She created a YouTube channel with the name ‘LeeMariahRose.’ Leola’s YouTube Channel is about the things that affect our daily lives. Also, she gives her point of view on Pop Culture, Parenting, and relationships through her vlogs.

Leola had joined the YouTube community on 28 February 2015. However, She began uploading her videos only since 2018. Currently, the YouTube Channel of Leola has a hundred subscribers with a total of eleven videos as of now.

Comedienne Leola Foreman is the daughter of George Foreman with his long-time wife, Mary Joan Martelly, a former native of an Eastern Caribbean Island.

Leola’s mother, Mary Joan, is the fifth wife of George. The couple took the wedding vows on 27 March 1985 and are together since then. After some years of their nuptials, the duo, George, and Mary gave birth to five children together, Natalie Foreman, George Foreman IV, George Foreman V, George Foreman VI, and  Leola.

Before Mary, Leola’s father was in a marital bond with Andrea Skeete, Sharon Goodson, Cynthia Lewis, and Adrienne Calhoun. The first marriage of George with Adrienne that had taken place in 1971 ended with a divorce in 1974. The second, with beauty queen Cynthia, continued from 1977 to 1979. The third, with Sharon, lasted from 1981 to 1982, and the fourth marriage of George with Andrea in 1982 ended in 1985.

George Foreman’s daughter, Leola, is a mother of two daughters, Lola-Rose Margaret Foreman, and Lilah-Joan Madeline Foreman. Although Leola often shared her daughters’ pictures earlier also, she revealed the name of her two little princesses via her Instagram in September 2018.

Leola has not revealed the details of her baby father, or partner or husband yet. However, going through a post in her gram, she seems to be married in the past. On her daughter, Lola’s birthday, she shared a picture with her two daughters and a man with a caption, which hinted that she is divorced.

Nevertheless, according to Leola’s relationship status in her Facebook, she is currently single and living a blessed life with her two stunning kids.

As mentioned earlier, Leola is a part of an expansive Foreman family. Leola has four sisters and five brothers with identical names. Also, in addition to nine siblings, she has two more sisters named; Isabella Brandie Lilja and Courtney Isaac, adopted by her father.

The eldest brother of Leola, George Foreman Jr., is a businessman. George Jr. is the Founding Managing Partner of IYC Capital. The second bruvver of Leola is George Foreman III, nicknamed Monk. He is a professional boxer like their dad. The third one is George Foreman IV, aka Big Wheel, their dad’s publicist, and an employee of their meat company ‘George Foreman Butcher Shop.’ Also, Big Wheel runs Foreman PR & Marketing alongside their sister Georgetta Foreman.

Besides, Leola’s four sisters are Natalia, Michi Foreman, Georgetta, and late Freeda Foreman. Leola’s sister, Freeda, who was also a successful professional boxer, died because of suicide in 2019.

Leola has a good relation with her all ten siblings. She often posts photos with her kinsfolk in her social media accounts.

Leola Foreman got her name after her aunt. The meaning of the French origin name Leola is Loyal.