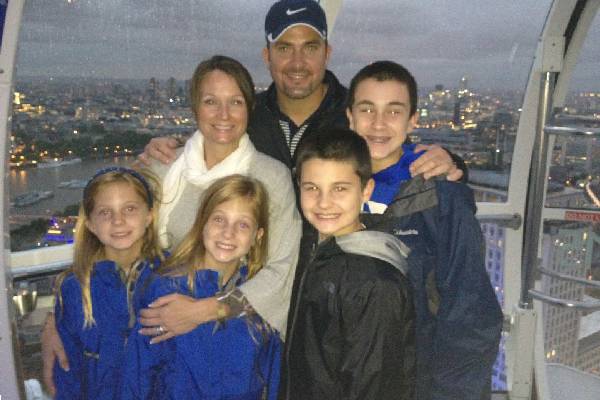 Born as Michael William Krzyzewski, Mike Krzyzewski is an American college basketball coach who served as the head coach of Duke University. During his four decades-long career as a head coach, Mike Krzyzewski has led Duke to win five NCAA Tournaments and 12 Final Four appearances.

Mike Krzyzewski’s last home game ended in a loss to North Caroline on March 5, 2022, at Cameron Indoor Stadium. His retirement was already announced on June 2, 2021, by Duke University.

The legendary coach is a family-oriented guy with three daughters and ten grandchildren, whom he shares with his wife, Mickie Krzyzewski. All of his children are grown up now and doing great in their personal and professional life. In today’s article, we will talk about Coach K’s eldest daughter, Debbie Savarino.

Aforementioned, the former coach of Duke University has three children with his wife, Mickie Krzyzewski. The couple walked down the aisle at the Catholic chapel at West Point in 1969.

Ever since then, the pair has been together, and they grew their family of two into five. Mike Krzyzewski’s daughter Debbie Savarino is the oldest one among the Krzyzewski siblings.

Furthermore, Debbie’s other younger sister, Jamie Spatola got married to former U.S. army and current ESPN anchor Chris Spatola. Jamie has two daughters and a son with her husband.

Debbie Savarino is the daughter of famous coach Mike Krzyzewski and also a mother of a rising basketball player, Michael Savarino. She graduated from Duke University in 1993 with a major in Sociology.

Then in 2002, Debbie joined Duke’s staff as the chief money raiser for the K Lab, sports performance research center of the University.

Is A Loving Partner And A Doting Mother

Well, Debbie Savarino seems to be doing great in her professional life. Her personal life is also a huge success as she married a long time ago and has already established a perfect family with her husband, Peter Savarino.

Although there is not much information regarding the marriage of Debbie and Peter, it is evident that the couple has been together since the late nineties. Peter Savarino mostly came into the media limelight as coach Mike Krzyzewski’s son-in-law but prefers to live a private life.

Apart from being a loving partner, Mike Krzyzewski’s daughter, Debbie, is also a doting mother to her four children, sons: Joey Savarino and Michael Savarino, and daughters: Carly Savarino and Emmie Savarino.

Her son Michael Savarino is a rising basketball player on the Duke Basketball team. Well, Debbie’s son Micheal was suspended from the team for about a month after being arrested for drunk driving in Nov 2021. Nevertheless, he returned to play during the Blue Devil victory over S.C State the following month.

Unfortunately, Debbie seems to have some health issues. Back in 2011, Mike Krzyzewski’s daughter Debbie Savarino had a stroke. The stroke was caused by vertebral artery dissection. With the proper medical attention and care, she recovered fully just after seven weeks.

However, it has been more than ten years ever since Debbie suffered from the stroke attack, and she doesn’t seem to have any issue related to her well-being.

Nonetheless, Mike Krzyzewski’s eldest daughter Debbie Savarino is a beautiful woman who has created a perfect professional and personal life. We wish her prosperous and healthy life ahead.

The Name Debbie means a “Bee,” and has Hebrew origin.