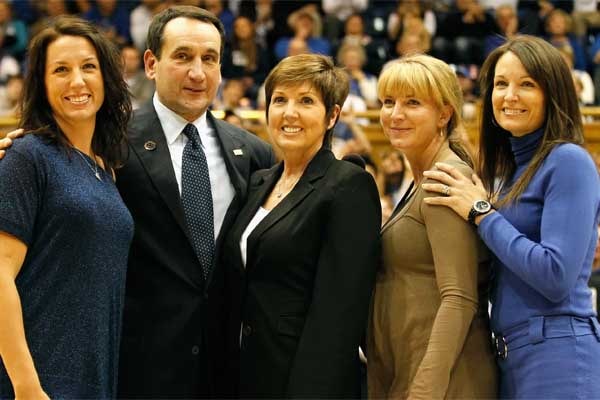 Mike Krzyzewski is not only a basketball player or one of the greatest coaches of all times but also a proud father of three daughters. Image Source: Mike's website.

Born as Michael William Krzyzewski, Coach K is a former American basketball player and head coach of Duke University. He married his wife Carol “Mickie” Marsh at the Catholic chapel at West Point on the day of his graduation in 1969. Together, the couple has three daughters Debbie Savarino, Lindy Frasher, and Jamie Spatola.

Mike Krzyzewski, aka Coach K, is clearly a family guy with three daughters, three sons-in-law, and nine grandchildren. His grandson Michael Savarino is currently playing for the Duke basketball team. Michael is Debbie’s son, and she is the eldest amongst the three. That said, let’s know more about Mike Krzyzewski’s children.

As addressed above, Michael’s daughter Debbie is the oldest amongst the three. However, when we last heard of her, she was recovering from her stroke which was caused by a vertebral artery dissection. Apart from that, she is currently enjoying her marital life with her husband, Peter Savarino. Together the couple is parenting four children, two sons Joey Savarino and Michael Giovanni Savarino and two daughters, Emmie Savarino, and Carly Savarino.

Mike Krzyzewski’s daughter Lindy Frasher graduated from Wake Forest University with a B.S. in psychology and minors in Spanish and theater. Later she joined Pepperdine University and earned herself a master’s degree in clinical psychology. Whereas she is currently working as the Men’s Basketball Staff Counselor for the Duke basketball team. Not only that, but she is also the Dean of Upper School Girls at the Durham Academy.

Speaking of her love life, Lindy is married to her husband Steve Frasher. Furthermore, the lovely couple has three sons together, Quin Frasher, Remington Frasher, and Caden Frasher.

The youngest of Mike Krzyzewski’s daughters Jamie Spatola graduated from Duke in 2004 with a degree in English. She also owns an MBA degree from Cameron University and another masters’ degree in Liberal Studies from Duke. To date, she has co-authored two books with her beloved father, Mike, The Gold Standard and Beyond Basketball.

Furthermore, Jamie has been working as an executive assistant to the president of Cameron University since 2003. She reached English at a high school and also worked as the administrator of the Duke Men’s Basketball camp.

Moving on to her love life, she exchanged her vows with Chris Spatola, a U.S  Army Captain. Together the couple has three kids, son John David Spatola and daughters Mackenzie Spatola and Madeline Spatola.

A Family Of Eighteen

As mentioned above, Mike is obviously a family guy. He never let’s his three daughters out of his sight. We all know how much of a great coach he is, so it must not come as a surprise that his grandson Michael is good at basketball. Maybe the old man suggests some tips and tricks for his grandson to become a great player.

Nevertheless, all of Mike Krzyzewski’s daughters share a special bond with him and with each other.

Coach K who had NBA stars like Zion Williamson, Kyrie Irving, Jason Tatum, and Grant Hill under his belt retired mostly to spend time with his family.

“My family and I view this as a celebration.”

Knowing that he is gone, Duke’s associate head coach Jon Scheyer is named his successor.

Now to conclude, Mike is not only an excellent coach but also a successful husband and a proud father as well as a grandfather.

Mike Krzyzewski’s last home game ended with a 94-81 loss to North Caroline on March 5, 2022, at Cameron Indoor Stadium. This game was supposed to be the celebration for the coach, but sadly, Duke lost against North Caroline. Even though his last game was a loss, while delivering his farewell speech, the coach seemed to be glad it was done. Nevertheless, he had a well-storied and great 42 years of his career as a coach.

Mike Krzyzewski’s daughter, Debbie Savarino’s name, is of Hebrew origin, meaning Bee. Whereas Lindy Frasher’s name is of English origin and the meaning behind the name is beautiful; pretty; sweet.