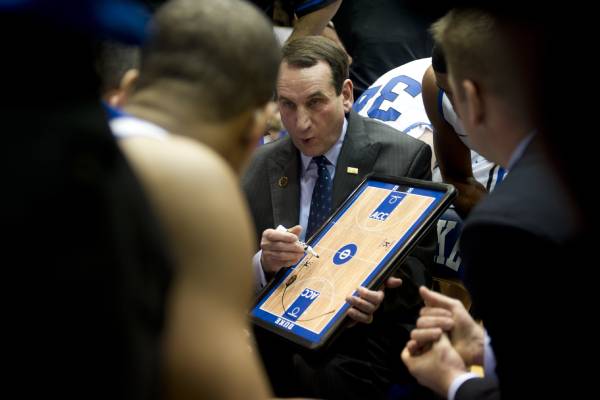 Michael William Krzyzewski, aka Mike Krzyzewski, is a popular basketball coach of American nationality. He is the former head coach at Duke University popular by his nickname, Coach K. For over four decades, the 75-year-old coached at Duke and officially retired in 2022. He has received several awards and accolades in his coaching career, including the 1991 NABC Coach of the Year, 2004 Clair Bee Coach of the Year, etc.

Because of his fame due to his professional career, Mike’s family has also come into the limelight. As a result, many have shown curiosity to know about his family life. He has been married to his wife for more than forty years. So, in this article, let’s learn about Mike Krzyzewski’s wife, Mickie Krzyzewski, and their love life.

Met Her Husband Mike At Work

Mickie Krzyzewski, aka Carol Marsh, was born on 26th September 1946 in Alexandria, Virginia. Unfortunately, Mickie hasn’t talked much about her childhood or parents. However, we do know that Mike Krzyzewski’s wife worked as an air hostess during her initial days.

Mickie met her husband, Mike, while working as a stewardess and it was love at first glance for the wonderful couple. Soon, they began dating and after being together for a couple of years, the love birds married in 1969 at a Catholic chapel in West Point, New York. Ironically, the wedding took place just hours after Mickie’s husband, Mike’s graduation.

The faithful couple has been married together for more than forty-two years. It seems the pair have shared a wonderful and blissful marriage. Their marriage is a true inspiration to all aspiring lovers around the world.

Nonetheless, Mike Krzyzewski and his wife, Mickie, exchanged their wedding vows again on their 35th wedding anniversary. To make it more special, the couple did it at Duke Chapel in 2004.

Shares Three Children With Her Spouse

During their marriage of over four decades, Mike Krzyzewski’s wife, Mickie Krzyzewski, has given birth to three daughters. All of her girls have studied or worked at Duke, making their father even proud.

Similarly, Mickie’s second daughter, Lindy Frasher, is married to a Durham businessman, Steve Frasher. The pair has three sons, Quin Frasher, Remington Frasher, and Caden Frasher. Lindy graduated from Wake Forest University with a major in Psychology. Like her elder sister, Lindy is also working with Duke University as the Basketball Staff Counselor.

Finally, Mickie Krzyzewski’s youngest daughter Jamie Spatola is an author. Jamie graduated from Duke University with a degree in English. Jamie is the wife of former U.S. veteran and current ESPN host Chris Spatola. The duo has two kids together.

Mickie Krzyzewski is a kind-hearted woman. She has been beside her husband from scratch. Furthermore, Mickie has been through many ups and down with her spouse. Mike himself has credited Micke for her role and influence on his life.

Furthermore, the couple has been actively involved in many social charities and fund-raising campaigns. Similarly, Mickie and her husband raise funds for several charitable organizations such as Duke Children’s Hospital, the V Foundation for Cancer Research, and the Children’s Miracle Network.

Nonetheless, Micke has also participated in various campaigns against drunk driving, drug abuse, and child labor. In addition, she started the Krzyzewski Family Scholarship Endowment. The campaign covers $100,000 in scholarship for North and South Carolina students of Duke University.

Well, Mickie must be loving her life right now. Furthermore, her grandchildren are also growing up well and make their own names. We thank the Krzyzewski family for their constant social service and wish them all the best for the future.