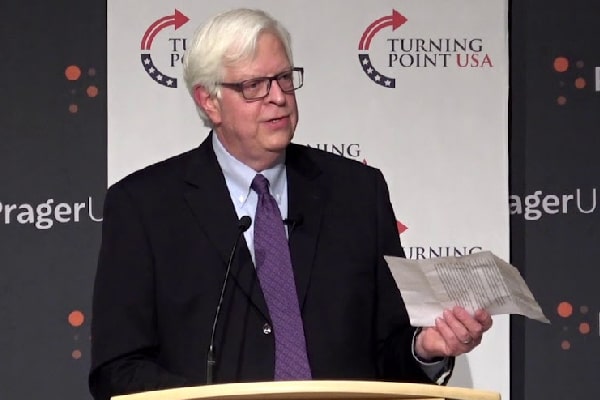 Married thrice, Dennis Prager has fathered four kids with his wives. It is no secret that he was married thrice and welcomed a son with each partner.

Therefore, here, we shall tail Dennis Prager’s children and their whereabouts. Also, did you know one of his kids is autistic? Read until the end to find out who.

Dennis Prager’s son, David Prager, was born from his first marriage with his ex-wife, Janice Adelstein Prager. The former couple had married in January 2001, influenced by George Gilder’s book, Men and Marriage.

After a couple of years into marriage, Janice gave birth to their son, David Prager. However, the former Prager pair got divorced when he was only four years old.

A picture of me and my son David, circa 1988… #PragerStrong #DPRS pic.twitter.com/KG1AXwLCtB

While there aren’t many details about his childhood, Dennis revealed David was obsessed with making and shooting toy guns in the six months during his parent’s separation. Likewise, when he asked if there were terrible monsters, his son would reply ‘yes’ and continue to kill them.

However, after six months, David said he did not have to kill any more monsters and showed no interest in guns and shooting.

Dennis Prager’s kid, David Prager, has been working at PragerU as Chief Development Officer since January 2020. He previously served as President at PragerConnect for almost eight years since March 2012.

Furthermore, The George Washington University graduate was associated with GrowltSmart Ltd as VP of Business Development for five years, from 2009 till March 2015.

Similarly, David also worked as a financial advisor at Morgan Stanley Smith Barney for a year in 2007 & served The Aleph Society in 2006.

Besides having an extensive & impressive resume, David Prager also has a beautiful marriage with his partner and has welcomed four kids together.

Furthermore, David often uploads pictures of his babies and wife online and seems to enjoy fun vacations together. Hence, David Prager is quite a happy man at this point.

However, he is not the only child in the family; David Prager’s dad also fathered three boys with his future wives.

As mentioned earlier, Dennis Prager got married thrice. After welcoming a son with his first wife, Dennis, and his second wife, Francine Stone, tried and conceived children as they both wanted two or more kids. However, they failed & had to face multiple miscarriages.

Therefore, Dennis and Francine adopted a baby boy named Aaron Henry Prager in 1992. Unfortunately, although Aaron’s father believed the first marriage helps navigate a wedding, his second one did not last.

And in 2005, Dennis and Francine divorced after 17 years of marriage. However, despite the separation, they both agreed on having joint custody of their son and maintained a strong bond with him.

They indeed had a friendship until Aaron Prager’s mom, Francine Stone, breathed her last on February 4, 2014, in California.

Although Aaron is pretty private about his life and merely shares personal details on his social media, he revealed that he currently works at Carron Treatment Centers.

Also, Prager has a sister, Anya (Larry) Wayne, born to his mother from her first marriage. For his relationship status, Aaron Prager is already engaged to the woman of his dreams. Unfortunately, he does not intend to reveal the woman, but the relationship status on his Facebook might change into married soon.

After first meeting at a speech, Dennis gave in Chabad’s Jewish organization in San Diego, Dennis Prager, and Susan Reed got married on 31 December 2008. Although the radio talk-show host was skeptical about the third marriage, he still managed to make it work somehow.

As of now, the Prager couple has welcomed two boys. Therefore, Dennis Prager’s wife, Susan Reed, gave up her full-time job at California Bar in the mid-90s to be a full-time mother of her two sons.

Sadly, one of Dennis & Susan Prager‘s sons is autistic, while the other son attended LA Canada High in 2010. Although Dennis never speaks of his autistic child, he is very eager to spread awareness among people.

Besides raising their own two boys, Dennis Prager’s wife also raised her two nieces after the death of her sister Cyndi from cancer.

Briefly, Dennis Prager’s children are all grown-ups and doing well in their lives. They even started building their own family and are happy. Hence, let’s hope the prosperity continues in the Prager family.

So, did we miss any, or you know more? Feel free to comment below.