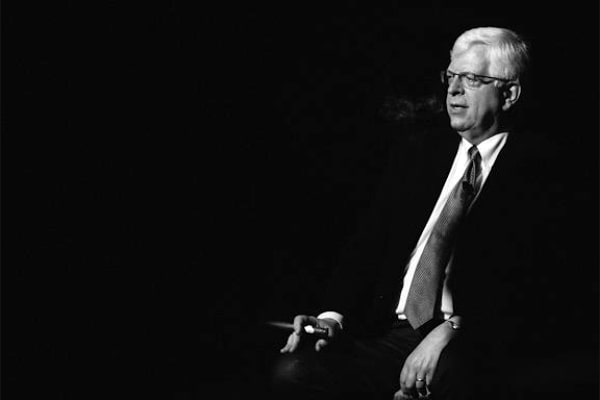 Dennis Prager is a reputed name as a Republican conservative radio talk show host and writer. He started his political work concerning Soviet Jews and their migration and gradually began a broader commentary on politics.

The co-founder of PragerU, a nonprofit organization, creates 5 minutes videos on political, philosophical, and economic topics from an American conservative perspective.

Apart from having a robust career as a radio host, Dennis struggled to find the love of his life until 2008. He married twice before settling down with Susan Reed in 2008. However, here, we shall talk about Dennis Prager’s ex-wives, Janice Prager and Francine Stone. Thus, enjoy.

As mentioned earlier, Republican conservative radio host Dennis Prager married thrice. He first tied the knot with his partner, Janice Prager, in 1981. He met his first wife in 1980 while teaching Judaism to college-aged Jewish singles, Janice Adelstein, a nurse at the Brandeis Bardin Institute in Simi Valley.

Dennis was influenced to marry quickly after reading George Gilder‘s book, Men and Marriage. Hence, the pair got married in January 1981. Furthermore, Prager’s ex-wife, Janice, did not have a reputation for brilliance, but she was pretty caring.

After a couple of years of marriage, the pair welcomed their first child, David Prager. Sadly, the Prager couple divorced in 1986. After their divorce, Dennis entered therapy for almost a year with Samuel Eisenstein.

A picture of me and my son David, circa 1988… #PragerStrong #DPRS pic.twitter.com/KG1AXwLCtB

Furthermore, Dennis Prager’s ex-wife is very private about her life. She is also absent from social media and prefers privacy after all the years. It looks like Janice did not just limit her work as a nurse but became a writer after co-authoring Why Be Different: A Look into Judaism. She further introduced herself as a human rights activist and a mother.

After Dennis Prager’s first failed marriage, he went into therapy. Later on, in September 1988, Dennis and Francine Stone exchanged vows. She was a model and actress who was initially disappointed to learn Dennis worked in the entertainment industry. However, Dennis knew he wanted to marry her the minute he saw her.

Francine, aka Fran, recalled Dennis kept asking her questions and soon exchanged their phone numbers. They began dating shortly after.

Moreover, Dennis Prager’s ex-wife, Francine Stone, was born in Kansas and her parents were Lutheran. Also, she was divorced from a Jew and probably could have converted to Judaism.

However, Dennis ‘wouldn’t marry’ his second wife until she went through with an Orthodox rabbi. Hence, she ‘consented,’ and after a year, she & her daughter, Anya, from her previous marriage, were converted as per Orthodox law.

Nevertheless, the former Prager couple, Dennis and Francine, exchanged vows on 4 September 1988 in LA by Rabbi Muskin. The pair reportedly did not go on a honeymoon for several months, and Dennis did his radio show on their wedding night.

Adopted A Baby Boy With Francine

Both Dennis and Fran tried to conceive more kids as they both wanted to have two or more kids. Hence, after multiple miscarriages, the Pragers adopted a baby boy, Aaron Henry Prager, in 1992. Well, the career-focused, beloved Dennis did not have to worry about missing a night of radio as Aaron was born on Friday.

Once, Dennis said that he was tempted to pass a law that stated one cannot have a kid in their first marriage for the first five years. Prager later added that people start with their second marriage as nonsense is sorted out with the first one.

However, Dennis Prager’s second marriage did not work out either. The pair parted ways in 2005 after seventeen years of marriage. Moreover, Dennis announced his divorce on his radio show on December 30, 2005, fearing some people would no longer take him seriously.

Dennis and Fran maintained a strong bond despite the divorce and shared joint custody of their son. Unfortunately, she died on February 4, 2014, near home in Thousand Oaks, California.

After the second devastating divorce, Dennis Prager met his third wife, Susan Reed, at the Jewish organization Chabad in San Diego, where he gave a speech. The pair first met in 2008, and within a few dates, the couple decided on exchanging vows on 31 December 2008.

The Prager pair soon welcomed two sons, one of whom was autistic, and another attended the same high school as his mother in California. Moreover, Mrs. Susan Prager gave up her career to become a full-time mother for her two sons. She later raised her two nieces as her sister, Cyndi, died of cancer.

As of now, Dennis Prager and Susan Prager have a blissful marital relationship. However, Prager’s ex-wives, Janice and Francine Stone Prager, preferred seclusion from the media approach.