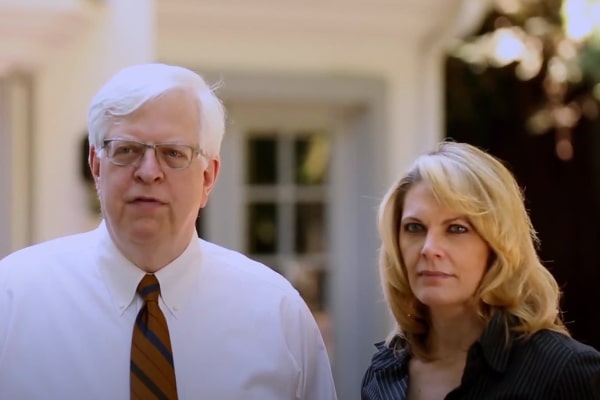 Dennis Prager is an American Republican conservative radio talk show host and writer whose initial political work was about Soviet Jews who could not emigrate. Prager had worked with many political figures like Bob Dole and endorsed Donald Trump in the 2016 presidential election, later clarifying he’s not a ‘Trump supporter when there was a choice.’

Besides having a rock-solid political career, Dennis Prager is also enjoying a blissful marital life with his wife, Susan Reed, since 2008. The pair prefers privacy, but Susan is a woman of her own creed who needs her own spotlight.

Therefore, here’s everything about Dennis Prager’s wife, Susan Reed, and her whereabouts.

Aforementioned, Dennis Prager is a Republican conservative who never hesitated to point out wrongdoings and was always clear about who and how he supported.

But Dennis, too, has undivided attention and support from his life partner, Susan Reed. Unfortunately, Dennis Prager’s spouse is pretty secretive about her whereabouts. Furthermore, she does not share much of her pictures on her social media.

Moreover, Susan is available on Facebook name, Susan Springett Reed Prager. Her profile picture is a cute little pup which seems to be an English Mastiff pup. Likewise, Susan has no public photos uploaded, but she did mention her academics.

Susan, known as Sue, was raised in the Los Angeles area. She graduated from Occidental College with a major in Political Science and got her law degree from Loyola Law School. She was later admitted to the California Bar in late 1994. Moreover, after a half-year practicing business transaction law, Dennis Prager’s spouse left her career as a full-time mother of two boys.

The La Cañada High School graduate appears in a few interviews, but her social life is under wraps. Furthermore, Susan’s Facebook posts are mainly political that aligns with her husband pretty well. Despite all the secrets and confidentiality, Dennis Prager’s wife, Susan Reed, must be doing well personally.

The Prager couple first met at a speech Dennis gave at the Jewish organization Chabad in San Diego. Sue, aka Susan, used to live in the area until she moved to LA.

After his second marriage failed, Dennis was somewhat skeptical about the idea of marriage, but the beautiful and talented Sue changed his mind. Thus, they married the same year.

The pair exchanged vows on 31 December 2008 in an intimate ceremony. Although the ceremony was private, they must have celebrated their love grandly and welcomed two kids. As mentioned earlier, she left her full-time job to become a full-time mother as one of her two sons was autistic. Moreover, Sue’s other son attended LA Canada High back in 2010

But did you know she is Dennis’s third life partner?

Dennis Prager, however, was married twice before Susan. His first wife, Janice Prager, was married to him for five years, from 1981 to 1986. Reportedly, Susan’s husband underwent a year of therapy after the divorce. Furthermore, the former couple had welcomed their only child, a son, David Prager.

Susan and her stepson seem to have a good bond together. Moreover, he is a married man and a father of three himself.

Similarly, Dennis was married to Francine Stone for seventeen years, from 1988 until 2005. They adopted a son, Aaron Henry Prager, in 1992 and had a stepdaughter named Anya.

Unfortunately, Dennis Prager’s wife remains very private about her life except for a few appearances and interviews. However, she must be living a comfortable life as a wife and a wonderful mother despite the privacy. Therefore, let’s hope to hear more from her in the future.