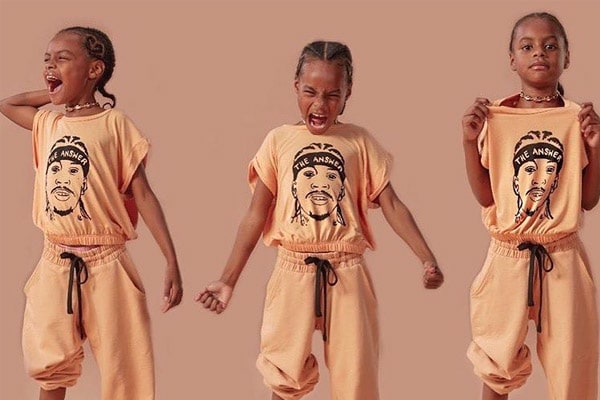 Allen Iverson, nicknamed The Answer and Al, is a former American professional basketball player. Allen, the NBA legend, played fourteen seasons in the NBA at both the point guard and shooting guard positions. He was an eleven-time NBA All-Star winning the All-Star game MVP award in 2001 and 2005. Sadly, the NBA’s Most Valuable Player winner in 2001 officially retired on 1 March 2014.

Besides being a great basketball player, Iverson is a proud dad to five gorgeous kids with ex-wife, Tawanna Turner. Here, meet one of Allen Iverson’s daughter, Dream Alijha Iverson.

As mentioned earlier, Allen is a father to five, three daughters, and two sons with Tawanna Turner. Among the five, Dream Alijha Iverson is his youngest daughter, whom he welcomed on 7 October 2008.

Allen Iverson’s daughter, Dream, has four elder siblings. The eldest sister of Dream is Tiaura Iverson, who was born on 15 December 1995. She is an Instagram star who has over 69K followers on her Instagram account with the name tiaurai.

The other sister of Dream, Messiah Lauren Iverson, is three years older than her. Tawanna gave birth to Messiah on 16 August 2005. Similarly, Dream Iverson’s brothers, Allen Iverson II and Isaiah Rahsaan Iverson, in 1998 and 8 August 2003, respectively.

The proud father, Allen Iverson, is very close with his baby mama Tawanna and their all five kids. He often shares photos with his family on his social networking handles. The pictures posted by Iverson shows how much he loves and is dedicated to his little ones.

Dream Alijha’s mother and father, Allen and Tawanna, met during their high school days. They developed an instant connection with one another and began dating since then. After a decade of staying in a romantic relationship, Tawanna and Allen took the wedding vows in 2001.

Dream’s momma was always there for Allen through his dark days of serving in the jail and other difficult days. For several years, they were living a happy life with their five beautiful children.

However, various issues created a crack in their marital life. And Tawanna filed for divorce twice in 2009 and some months later in the same year. At first, Allen pleaded with his then-wife, Tawanna, for its withdrawal. But, she stayed still in her decision. As a result, their divorce proceeding got finalized in 2013, with Dream’s mother walking away with $3 million.

There might be several reasons for their separation. One of Tawanna’s main reason for divorce revealed to the media is Allen’s addiction to alcoholism, gambling, and infidelity, wasting his fortune amassed from his NBA career. Iverson admitted the accusations of his baby mama, Tawanna, blaming his fast NBA lifestyle.

However, the love of their daughters and sons made the estranged couples reconcile soon after. They got back together and focused on raising their youngsters and rebuilding their relationship. After Allen retired from his playing days, Allen and Tawanna settled in Georgia, North Carolina with their children.

Her Mom’s Accusation On Her Father

During the divorce proceeding of Allen and Tawanna in 2013, Tawanna accused Allen of kidnapping Dream and her four other kids.

In 2013, while the process of official separation between Dream’s parents was still ongoing, her father took her and her siblings on vacation to Charlotte, North Carolina. According to Tawanna, he kept them at Sheraton Hotel in Georgia and refused to return them. The former NBA player denied the statement of his former wife, which she forswore later.