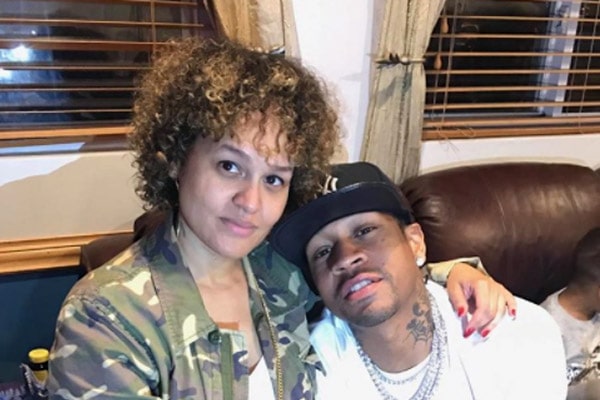 Allen Iverson, nicknamed AI, is one of the most honored American former basketball player. Before retiring officially from the game in 2013, Iverson played fourteen seasons in NBA. He played in both shooting guard and point guard positions winning various awards and titles. Allen Iverson was an MVP in 2001. Moreover, he was also eleven times all-star.

1997 Rookie of the year, Allen Iverson was married to Tawanna Turner for over a decade till they divorced in 2013. However, their separation became just limited in papers. Even after the divorce, Allen and his real love Tawanna stay together with their five gorgeous kids.

Here, know who is the ex-wife of Allen Iverson and the details on their relationship.

Married To Allen Iverson For Over A Decade

Tawanna met the love of her life, Allen Iverson, while in her high school days. The two fell in love since then and married after dating for over a decade, in 2001. Their marriage ceremony took place in The Mansion on Main Street in Voorhees, New Jersey.

The married life of Allen with Tawanna went so well for some years. However, Allen’s addiction to gambling and drinking played a significant role in creating a crack in their marital life. While Tawanna looked after their kids at home, he used to stay out late in casinos.

Moreover, Iverson had outstanding debts to several casinos. He even did not have enough money to pay for his children’s tuition. So, his ex-wife Tawanna used to pay all the dollars needed to raise their youngsters selling her valuable jewelry.

The problems do not end there. Once during a heated argument, Allen kicked Tawanna out of their home. Tawanna was naked.

The ex-wife of the NBA Legend, Turner could not hold all those issues in her life for long. Consequently, she filed for divorce twice in 2009. At her first attempt, Allen pleaded to her for withdrawal of the divorce filing. But, it did not work. The legal separation of Tawanna with Allen got finalized in 2013, the same year Allen retired officially from the game.

However, the estranged couple reconciled soon after their divorce settlement. It is still uncertain if the duo remarried. But seeing the pictures of Tawanna all over Allen’s social media accounts, it’s clear that they are bringing their love right on track.

Besides frequent expression of love on social networking handles, Allen is never afraid to talk about his lady in his memorable moments. In 2016, Allen paid a touching tribute to his high-school love and ex-wife during his induction to the Basketball Hall of Fame.

Allen, one of the legendary basketball players, thanked everyone who played a vital role throughout his career as a basketball player. And, he saved the impassioned thanks for his long-suffering former wife for the last.

At the end of Allen’s thirty-two minutes speech, he revealed that Tawanna, his ex-wife, is the number one person in the world for him. Moreover, he said Tawanna that he loves her so much.

“24 years, ups, downs, but real love. I can’t thank you enough for all you’ve done for me…I love you so much.”

Also, he thanked his ex-wife for how she loved him and took care of their children.

Allen and his former partner, Tawanna, are parents to five kids together.

Tawanna gave birth to two children of Allen, one daughter and a son before their marriage. Their first child, Tiaura Iverson, was born on 15 December 1995. Similarly, they welcomed their second kid, Allen Iverson II, in 1998.

After their wedding, Tawanna gave birth to three more youngsters of Iverson. Their son, Isaiah Rahsaan Iverson, added up to their family on 8 August 2003. Likewise, her two daughters, Messiah Lauren Iverson and Dream Alijha Iverson, were born on 16 August 2005 and 7 October 2008 respectively.

At the moment, the lovebirds and their five little ones reside together in Georgia.

Life Away From The Media Reach

Tawanna Turner seems to prefer a life away from the reach of the prying eyes of the media. She does not appear much in public events.

Besides appearing on the Instagram of her ex-husband, Allen Iverson, Tawanna does not have any social media accounts registered on her name. Probably, she might be operating them in other words. But, it is not known to the media yet. Hence, it is not known which profession Tawanna is engaged in the present.