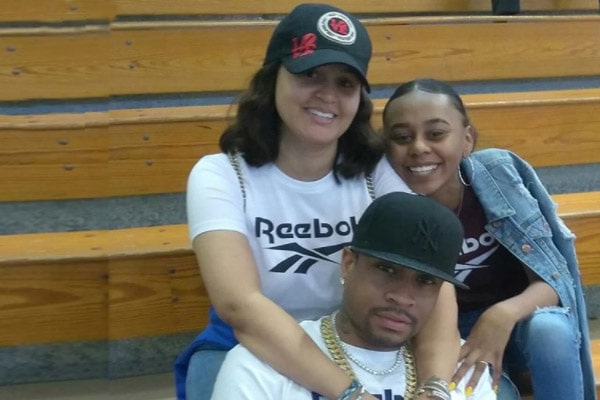 Messiah Lauren Iverson is one of the three daughters of Allen with his ex-wife, Tawanna. Image Source: Instagram/ Allen Iverson.

Allen Iverson is one of the most honored former American professional basketball players. The Virginia-born player played fourteen seasons in the NBA at both the point guard and shooting guard positions before retiring officially in 2013. After staying far from the game for some years, Iverson signed up to be a coach, player, and captain on 3’s Company in 2017.

Allen Iverson is a dedicated father to five children with his ex-wife Tawanna Turner. Here, meet one of Allen Iverson’s daughters, Messiah Lauren Iverson, and be familiar with some of her facts.

One Among Three Daughters Of Allen

As we mentioned above, the NBA Legend Allen Iverson is a father to five gorgeous youngsters with his ex-wife, Tawanna Turner.

Allen welcomed his daughter Messiah Lauren Iverson with former wife, Tawanna Turner on 16 August 2005 in the United States. Besides, she is a sister to two of Allen Iverson’s daughters.

Messiah’s eldest sister, ten years older than her, Tiaura Iverson, was born on 15 December 1995. Currently, she is famous among thousands of people around the globe as an Instagram Star. As of now, Tiaura has over 69K followers on her Instagram account tiaurai.

Likewise, Messiah’s younger sister, Dream Alijha Iverson, was born on 7 October 2008. She is the youngest child on the Iverson family.

Relationship Of Her Parents

Messiah Iverson’s father, Allen, fell in love with her mother, Tawanna, when both were in high school. Allen dated his high-school sweetheart for a decade. Then, the two took the wedding vows in 2001 at The Mansion on Main Street in Voorhees, New Jersey.

Everything was going smoothly between Messiah’s parents for some years. However, several issues began creating cracks in their happy married life. As a result, Tawanna filed for divorce twice in 2009, seeking custody of all five kids and alimony payments.

At first, Allen pleaded Tawanna for the withdrawal of the divorce filing. However, Messiah’s mother insisted on the official separation with him. As a result, the divorce proceeding got finalized in 2013, Tawanna walking away with $3 million as alimony.

However, the estranged couple could not stay far from each other for long. After less than a month, Messiah’s mom and dad reconciled. Currently, the happy family of Messiah Iverson resides in Georgia.

Many of the fans of Allen’s might think that Allen’s primary concern is his basketball career. But in contrast, proud dad, Iverson’s main focus is always his family.

In 2009, when Allen was scheduled to start his 11th NBA All-star game, he did not attend the festivities. Instead, he stayed home to look after his then seriously ill daughter, Messiah.

At that time, doctors speculated that the Messiah might have pneumonia. But they were not sure about that. Though the real reason behind Messiah’s illness never came out in the media, she recovered well.

Later, when Messiah recovered, her father rejoined his team after missing five games to be with her.

Allen’s dedication and love for his family can be seen clearly on his Instagram and other social networking handles. Fans can see the photos of Allen Iverson’s daughter, Messiah, her siblings, and mother often in his Instagram and Twitter.

The name Messiah is an English origin name, which means Anointed One. Similarly, the middle name Lauren means sweet of honor or wisdom.