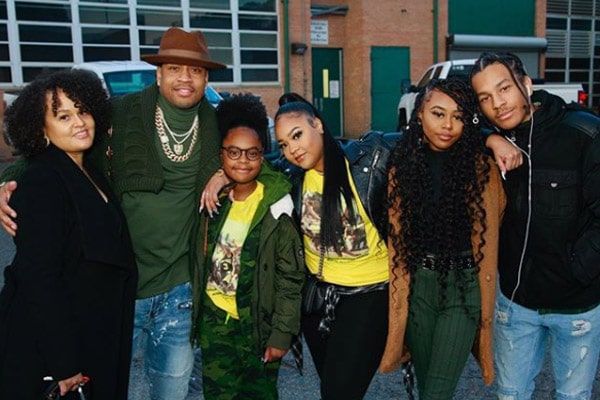 Allen Iverson, nicknamed AI, is a former American professional Basketball player who played for both at shooting guard and point guard. During his career in NBA, he played fourteen seasons, winning various titles and awards. Iverson, the NBA Legend, disappeared from the game since 2011 but officially retired as an NBA player in 2013.

It’s been almost a decade since the two-times All-star game MVP award winner, Allen is out of the game. Currently, he is living a contented life with his five gorgeous children and baby mama Tawanna Turner.

Youngest Son Of Allen And Tawanna

One of the most honored basketball players, Allen Iverson, is a father to five youngsters. He has three daughters and two sons.

There is no information regarding the childhood days and educational qualification of Isaiah available for the public. Although Allen often posts photos of his kids on his social media accounts, he never opens up about their everyday life.

His Middle Name, A Tribute To Allen’s Friend

Allen Iverson has a great place in his heart for those who are close to him. He inked a tattoo inscribed ‘RA Boogie’ on his neck as a tribute to his childhood pal Rahsaan, who was lethally shot in Hampton, Virginia. Moreover, Allen gave his name to his youngest son, Isaiah Rahsaan.

Furthermore, Isaiah’s father has tattooed his name on his arms, too, as a tribute.

Relationship Of His Parents

Isaiah’s mother and father first met in their high school days and fell in love since then. After a decade, Allen and Tawanna’s romantic relationship turned into a marriage in 2001.

Tawanna supported Allen during his life’s every difficult time, including Allen’s dark days in prison. She looked after their kids while Allen used to be in his basketball game. However, it did not last long. The father of five, Allen’s addiction to gambling, alcoholism, and infidelity, forced Tawanna to file for divorce twice in 2009.

Although Isaiah’s dad pleaded her mom for withdrawal of their divorce filing, it did not work out. The divorce proceeding got finalized in 2013, the same year Allen retired officially from the game. Despite all the issues creating a crack in their relationship, Isaiah’s parents reconciled soon after. At the moment, the family of Iverson resides together in Georgia.

His Dad Was Charged For Kidnapping Him

Once Isaiah’s mom, Tawanna, charged his dad for kidnapping him along with his four siblings. Tawanna accused Allen of abducting them when they were not returned to her in time.

In 2013, while the divorce proceeding between the parents of five, Tawanna and Allen, was ongoing, Allen took all five kiddos from their momma. He told Tawanna that he was taking the kids for a vacation to Charlotte, North Carolina. But he did not return them on time as decided by the then-husband and wife, on May 26. And it caused Tawanna file against Allen for kidnapping Isaiah and other kids.

However, Allen returned after some days and denied all the allegations made by Tawanna. Later, Tawanna also renounced all her claims. It just proved to be a result of a protective mother’s

Moreover, the privacy-concerned son of Allen, Isaiah, does not seem to have any social media accounts registered on his name. At the moment, Isaiah is living a life far from the prying eyes of the press.