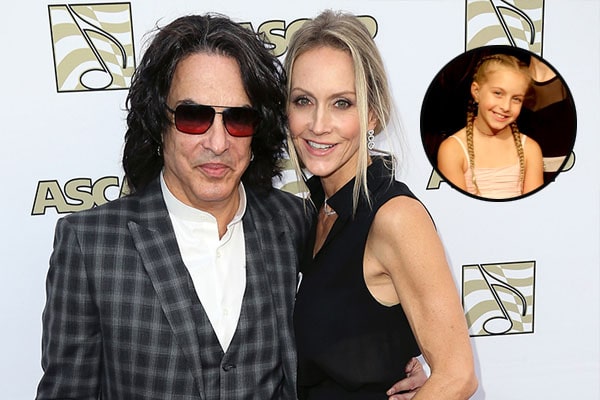 Paul Stanley's daughter is Emily Grace Stanley, whom he had with his wife, Erin Sutton. Image Source: The Knot News.

The rock band, Kiss’ guitarist and co-lead vocalist Paul Stanley, and his attorney wife, Erin Sutton, married on Nov 19, 2005. The love couple is blessed with three children; a son and two daughters. Among them, Emily Grace Stanley is the youngest of all and was born on Aug 9, 2011, weighing 7 lbs, 10 oz, in Los Angeles.

Paul Stanley’s daughter, Emily Grace’s two siblings, are Colin Michael Stanley and Sarah Brianna Stanley. She also has a half-brother named Evan Shane Stanley, who is Paul Stanley’s son with Pamela Bowen from his previous marriage. So, let’s get down to know more about Emily Grace Stanley.

As mentioned before, Paul Stanley’s daughter, Emily Grace is the youngest member of the Stanley family. The love couple was on cloud nine with the addition of cute Emily Grace to their family. According to People, Paul was so happy that he had said,

“I’m not sure she can sing but her first screams let me know she’s definitely Daddy’s girl.”

As the youngest Stanley member, it is likely that she must be getting lots of attention and love from her parents. Emily also seems to have a strong bond with her half-brother, Evan Shane.

Similarly, Paul Stanley has a staggering net worth of $150 million. So, Emily Grace might be cheering up with the lavish life that her father has set up from the music career. Paul Stanley’s daughter is probably living the bestest life with her family. Emily Grace’s dad possibly takes her and the family members to various exciting places to celebrate holidays and vacations.

Likewise, Paul Stanley might be making all her wishes come true like a genie. And who knows, if Emily herself can amass that much fortune in the future.

Paul Stanley and his wife, Erin Sutton are the ideal parents and have succeeded to distance their kids from social media, cameras, and the spotlight. As for Emily Grace, she has been well-protected by her parents. Paul Stanley even barely posts his adorable children’s photos on Instagram.

They are probably protective of Emily so that she gets to live a comfortable life. Nevertheless, Paul Stanley and Erin Sutton take their children to award shows and performances. The guitarist and his family had headed out for The Kiss Kruise on Nov 3, 2016.

However, they seemingly want their children to be brought up away from the public eye. So, Emily Grace is not a familiar face that we see every day on TV or elsewhere.