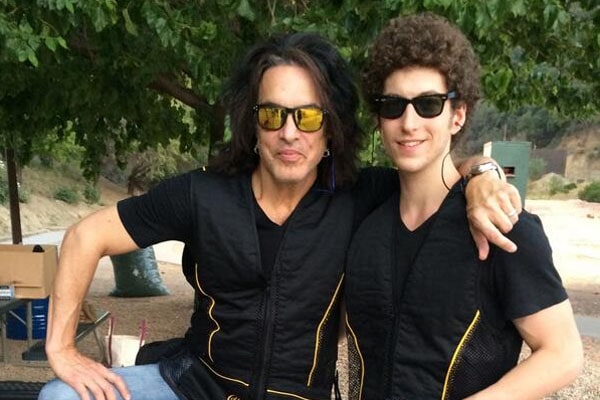 Paul Stanley's son is Evan Shane Stanley, whom he had with his ex-wife, Pamela Bowen. Image Source: Twitter.

The handsome Evan Shane Stanley is Paul Stanley‘s eldest son with ex-wife, Pamela Bowen. He is very fortunate to have such talented artists as parents. Evan’s dad, Paul Stanley, is best known as guitarist and co-lead vocalist of the rock band, Kiss. As for his mother, on the other hand, is an actress by profession. Unfortunately, Evan Shane’s parents divorced each other in 2001.

As for Evan Shane’s career, he extended his father’s legacy by following his father’s career path. He is a fantastic guitarist and singer. The music artist enjoyed his childhood listening to The Clash, Nickelback, Scorpions, and so on. When he was 14 years old, Evan’s dad Paul Stanley gifted him with an electric guitar. And with a passion for music, Evan studied at the Clive Davis Institue of Recorded Music at NYU.

Then, he stepped up his career as frontman and guitarist of the band, The Dives as it formed in 2017 with Mike Lefton, Sergio Ortega, and Jimmy Meier as the band members. Thanks to his talent, he gained promising popularity in the music industry. The Dives released their debut EP, Everybody’s Talkin’ in the same year. However, the guitarist left the band after sometimes due to his personal reasons.

As of now, Evan Shane is a solo-music artist. Going through his Instagram account, he seems to be thriving as a singer and guitarist. He captioned an Instagram post saying ‘working on lots of new music.’ So, everyone, be ready to listen to the talented Evan Shane’s brand new songs and albums in the coming days.

Plus listening to some of Shane’s songs on his SoundCloud account, one can see how much of a talent he is.

Paul Stanley’s son, Evan, is already committed to the loving relationship with his gorgeous girlfriend, Alissa. As seen on Evan’s Instagram, Evan and Alissa seemingly like to spend lovely times with each other going on romantic dates and parties. Even if the love-birds’ first meet is a secret, they probably fell in love with each other at first glance.

Perhaps, Evan’s parents are glad about his lovely relationship with Alissa. The adorable couple is always there for each other and seems to be delighted with their love life. Hope, we get to see the wedding of Evan and his girlfriend, Alissa, soon enough.

Although Evan’s dad and mum divorced each other in 2001, he got equal love from his parents and is very close to them. The divorce and separation did not stop Evan to love dad and mum. He loves hanging out with Paul Stanley as well as Pamela Bowen.

Evan’s parents support his rising career too. His dad is giving a hand for Evan to flourish as a better artist whereas his mum, Pamela seems to support her as the biggest fan. So let’s hope we get to listen much of Evan’s songs and see him flourish as his father in the music industry.

The name ‘Evan’ is related to the Gaelic word ‘Eóghan,’ meaning young warrior. As for his middle name Shane, it is derived from the Irish origin that refers to ‘graced by god.’