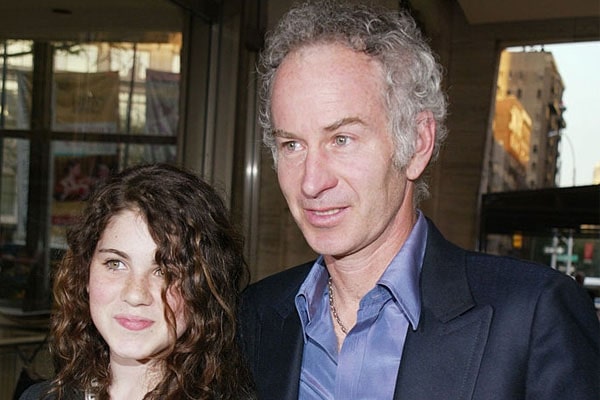 Emily McEnroe is John McEnroe‘s daughter with his ex-wife, Tatum O’Neal, and was born on May 10, 1991. Gorgeous Emily is fortunate to have such talented and loving parents. Her dad, John McEnroe, is a former tennis champion and her mom, Tatum O’Neal is an actress and author, also the youngest person ever to win the Academy Award.

Emily has two brothers named Kevin McEnroe and Sean O’Neal. She also has two half-sisters, Anna McEnroe and Ava McEnroe, who are John McEnroe’s daughters with his wife, Patty Smyth. So, without wasting any further, let’s get to know more about gorgeous Emily McEnroe.

John McEnroe’s daughter, Emily, planned to settle her career as an actress. Today she is very determined to emerge as a prolific actress on her own. Even though Emily’s parents are well-know celebrities in the entertainment industry, she is doing her best to establish herself as a talented and beautiful actress.

Well, she got the role to portray the role of Sheila for her first ever movie, Futra Days. Surprisingly, the post-production for Emily’s movie has probably started. Perhaps, Emily must be very excited about her first movie. All of her family members are apparently very happy and proud of her. We can say that she is trying to continue her mother’s legacy in the film industry.

With that, she is probably getting offers for more exciting movies in the coming years. Although Emily’s career is at the beginning phase, who knows, she might gather a huge name and fame in the future. Let’s hope everything goes in Emily’s favor for her dream career.

Emily McEnroe admitted that she had been in therapy ‘since childhood’ and had a difficult one. Being a kid of famous parents wasn’t easy for Emily, whose childhood dramas were played out in the pages of tabloid magazines. She also said how it was like to grow up McEnroe with all the privileges and pitfalls.

Emily went through a rough childhood because she was just three when her parents’ marriage imploded. John gained custody after the divorce, so Emily lived with him. She would visit her mom at weekends only. There were ‘long absences’ as Tatum sought for drug addiction treatment before. Emily herself claimed that the other reason was she had to be loud to be noticed. She said:

‘I’ve had a good sense of self but sometimes it’s hard to find your own identity when you’ve got powerhouse parents. We’ve had our fights like all families but we’re there for each other.’

Nevertheless, Emily’s parents have a warm relation as of now. Now that everything seems to be going well in Emily’s life, she probably has a happy family. Emily and her mom are like best friends to each other.

Going through John McEnroe’s daughter Emily McEnroe’s Instagram, she is apparently blessed and happy with her life. It looks like she is not in any kind of serious relationship with anyone. The gorgeous girl might be rocking with her single life.

Even if she is low-key committed in a loving relationship with her partner, the guy must be very lucky to have Emily as his partner.

According to German origin, Emily came from the word Aemilius, meaning ‘industrious.’