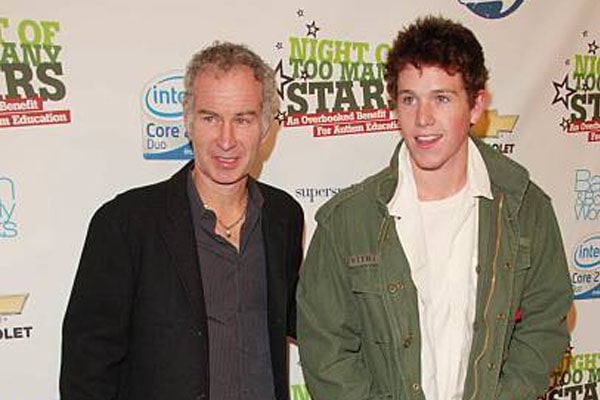 Born on Sep 23, 1987, Sean O’Neal is the second child of ex-couple, John McEnroe, and Tatum O’Neal. Sean’s dad is a former American tennis player and mom, Tatum O’Neal is an American actress. After eight years of marriage, Sean’s parents divorced each other in 1994. Then, John McEnroe married his wife, Patty Smyth, in 1997.

Besides that, Sean O’Neal has four siblings altogether. He has two siblings named Kevin McEnroe and Emily McEnroe. Similarly, he also has two half-sisters named Anna McEnroe and Ava McEnroe, who are John McEnroe’s daughters with Patty Smyth. So, let’s get straight into the article and know more about John McEnroe’s son, Sean O’Neal.

Sean stuck to a different path rather than following his dad’s or mom’s footsteps. He is a talented and aspiring photographer and self-described “artist-activist” behind the lens. The photographer’s net worth probably comprises of earnings from his photography career only.

In 2014, John McEnroe’s son photography skills took everyone’s breath away that he got to traverse the earthquake-stricken areas of Nepal to meet the population living there. He visited with the non-profit organization, CITTA two months after the disastrous earthquake to photograph the aftermath in 2014. The photos, Sean had clicked while his travel journey exhibited during the Full Moon Bazaar event.

Sean O’Neal Was This Close To Being Broke

According to Page Six, John McEnroe’s kid, Sean O’Neal, was very close to being broke. Just because you’re a celebrity kid doesn’t mean you have an elegant and lavish lifestyle. Although his dad and mom have astounding net worths, he did everything on his own.

Sean was an LA-based photographer, and he had set up a GoFundMe page on Mar 2, 2016. He asked the public for $10, 000 donations for his upcoming photo exhibition. But the main problem was it never existed. Even if Sean’s GoFundMe page stated that money would benefit a show, his now ex-manager, Barbara Assante, admitted to The Post of no confirmed exhibit. Sean said that Assante deceived him, returned $858 raised, and fired her as well.

He also stated on GoFundMe that the operation he had performed at USC’s Keck Medical Center left him ‘in debt’ and hadn’t paid for the procedure. Perhaps he had to pay over $30,000, even with insurance. He was on the verge of being broke.

Sean O’Neal said to PEOPLE why he had to change his dad’s surname to his momma’s. He was Sean McEnroe before but decided to drop his father’s last name and take his mom’s as his surname in 2015. He said,

“I changed my name to Sean O’Neal – it’s nothing against my dad but I wanted to have my own path that is not so directly linked to him because it’s just the way people have [always] perceived me.”

Well, Sean just wanted to do things on his own and make his own path for the future. Nevertheless, he respects his dad, regardless of their differences.

Well, we assume John McEnroe’s son has sorted out things with him as of now. Any father loves his children and cannot hate him for life. So, they probably have a fine and close relationship with each other.

The name Sean is an Irish baby name, meaning ‘God is gracious; a gift from God.’